The Hot Wheels expansion to Forza Horizon 3 drops players onto an island playground criss-crossed with Hot Wheels tracks, littered with Hot Wheels set pieces, and populated with Hot Wheels cars. Given the cartoon aesthetics and gravity-defying circuits, you’d be forgiven for thinking that your Reliant Supervan III has suddenly gained the ability to corner – it hasn’t. Though certain parameters of the physics model have been relaxed, lose too much speed going up a vertical loop and you’ll witness your ride dive straight into the welcoming embrace of the ocean. Don't let orange and blue plastic tracks fool you – this is still a racing game.

The first lesson you’ll learn upon taking your first corner in the Bone Shaker is that you’ll still need to keep a finger on the brake – no Mario Kart shenanigans here. Everything you’ve learned in Forza Motorsport and in the regular Forza Horizon 3 still applies. That means selecting the appropriate vehicle for the conditions, watching your speed and angle on turns, and not using walls (or other racers) to course-correct.

It’s the emphasis on clean racing that seems most at odds with the Hot Wheels ethos of booster pads, crazy stunts and – most of all – spectacular crashes. That’s not to say there isn’t plenty of opportunity for the latter; you’re faced with split paths, Criss Cross Crash intersections, and the occasional animatronic T. Rex that will actually take a bite out of you if you get too close.

And the preponderance of jumps (and especially boosted jumps) means you can pull some truly anti-social moves, like giving someone a gentle tap to the rear quarter just as they leave the ramp, all but guaranteeing they’ll end up either flying off-course or smashing face-first into the edge of the roadbed on the other side. 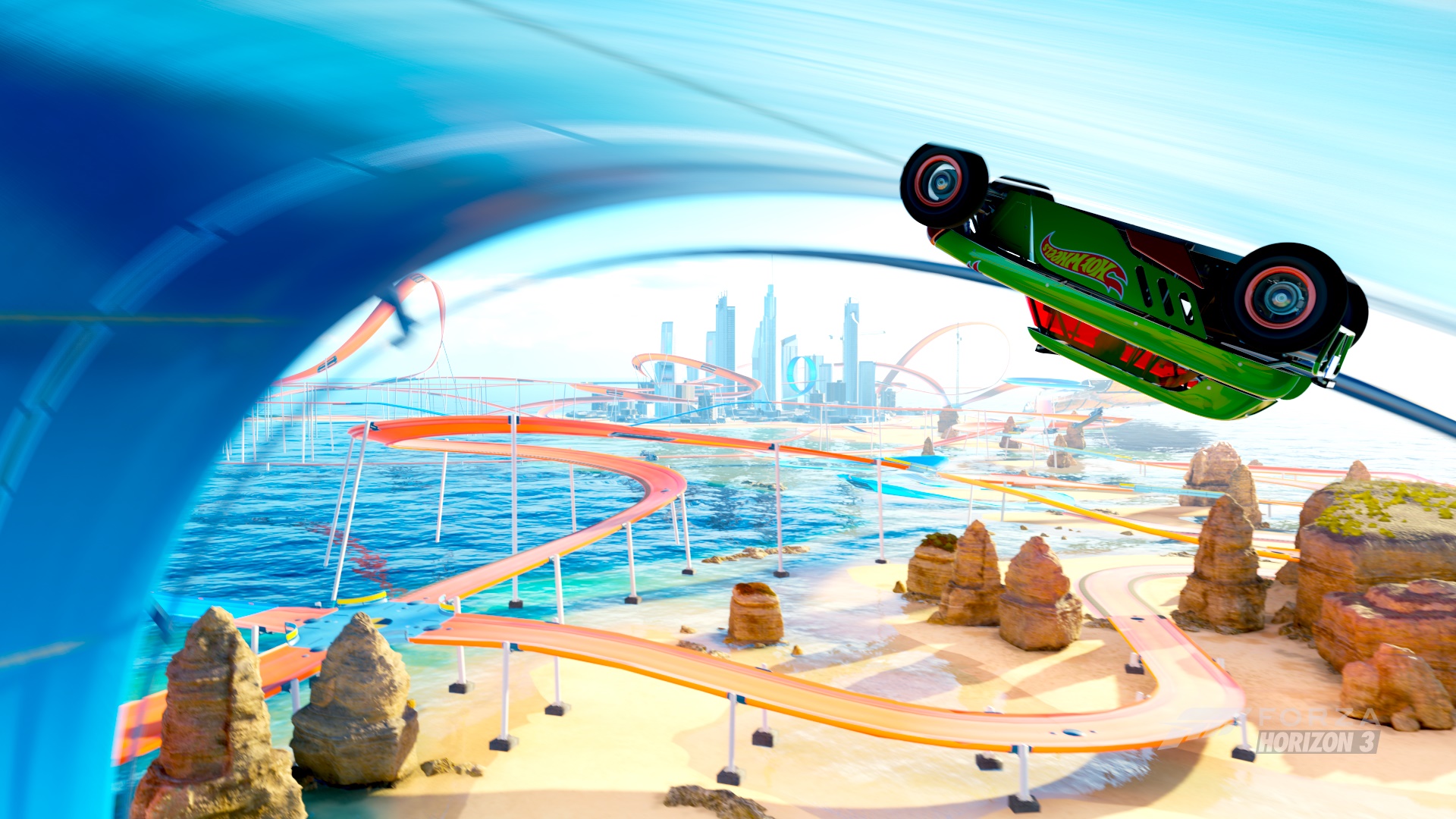 Or you could simply nudge them off the inside of the track on a gentle, extended curve where, despite being some 30 metres off the ground, there are no guard rails. The penalty for falling varies: you may be dropped back on the track at the rear of the pack, or you may be forced to continue racing from where you landed.

Defensive driving, then, appears to be the order of the day. That and picking a vehicle with a good Handling rating, if you’re the type to rocket into turns with wild abandon.

Or if you like hitting booster pads. Yes, they’re in the game, and no, the rush of speed never gets old.

The overall structure of the expansion content is the much the same as the base game or Blizzard Mountain: you complete races and events to unlock further races and events, which culminate in a grand showcase.

The new twist to this formula comes in the custom blueprints you can create for each race course. You can swap out one stunt for another – perhaps a sky-high spiral instead of a half-pipe – with a full range of track options at your disposal. Remember that one kid at school who always got the newest sets as soon as the commercials aired on TV? You are that kid, and you get to play on those sets with million-dollar exotics.

Because the roadways weaving up and over the islands on this map are almost entirely composed of various stunts and loops, getting around without using Anna, the built-in GPS, is nearly impossible. The in-game map looks like someone spilled a bowl of spaghetti on an atlas; seeing it from the dashboard, with orange and blue tracks woven across the sky, is scarcely more helpful. 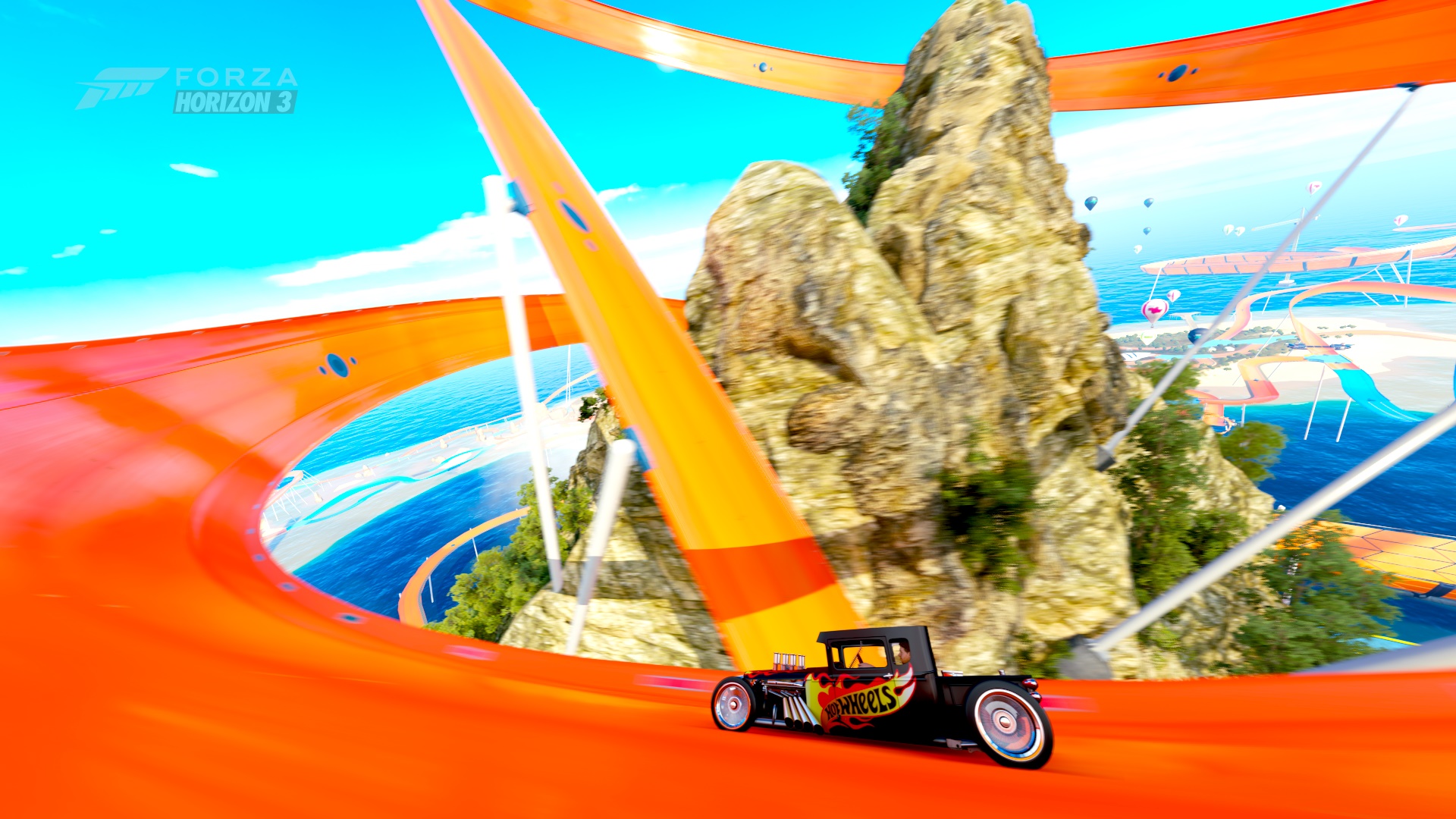 There’s another complication: there is no “wrong” way to get around the map, but there are definitely “easier” ways of taking a loop, or a near-vertical banked curve, particularly if you’re in a low-powered car. There’s one particular turn just outside the Festival hub where you’ll regularly see AI-driven cars cluster, stall, then tumble off the track. You too can engage in this dance if you don’t keep the accelerator floored on this ramp.

The answer? Get yourself into an S2-rated supercar and engage in some high-speed exploration. These tracks come alive for zippy, featherweight cars with oodles of grip and insane amounts of horsepower.

It’s easy to write off a Hot Wheels expansion as being “for kids”. No, flame decals don’t actually make your car go faster; no, no government would ever approve of such construction costs; no, there are no traffic lights or stop signs at a Criss Cross Crash junction, health and safety be damned. Hand the controller to anyone, however, and you’ll soon have to remind them to play nice and share with others.

In practice, the plastic tracks and 360-degree loops demand just as much concentration and finesse as any other racing circuit you’ll find in Forza. In fact, you may wish to bump the difficulty down a notch until you get used to the unusual road geometry. (Novice players should enable traction and stability control but disable assisted steering and braking, since the AI has difficulty with certain turns, as mentioned above.)

So no, don’t get this for a kid, they’re spoiled enough already. Get it for yourself. And tell your friends to get it too, because there’s no local multiplayer (never has its absence been more keenly felt).

Maybe the craziest thing about the Forza Horizon 3 Hot Wheels expansion is that it exists at all; Forza being a serious simulation racer, Hot Wheels a kid’s toy with plastic tracks, die-cast cars, and powered booster ramps. A safer collaboration might have produced an arcade-style, fantastical crash-and-tumble experience. Rather, the creators asked, “What if Hot Wheels existed in real life?” The answer, in case it wasn’t abundantly clear, is glorious.

About Andy Lin
Andy possesses basic literacy skills which manifest at random. If you're reading this blurb, such an event has occurred.
Follow me
AdChoices
Latest Articles