Is it just me, or have classic second-generation Chevrolet Chevelle SS's lately become the automotive equivalent of Star Trek's red-shirted security officers? Because whenever the camera pans over the sleekly powerful profile of a rumbling Chevelle SS, you just know it's doomed.

It's as if there's some sort of not-so-secret Hollywood conspiracy to crash every late-60s and early-1970s A-bodied Chevelle SS in existence. Or perhaps the studios simply ran out of second-generation Dodge Chargers thanks to TV shows and movies like Bullitt (1968), Vanishing Point (1971), Dirty Mary, Crazy Larry (1974), Cannonball (1976), the Dukes of Hazzard (1979-1985, 2005), and of course the Fast & Furious franchise (2001-onward), which could be retitled "Furiously Wrecking Fast Chargers".

If you've got a soft spot for classic Chevelle SS's, here's a list of just some of the movies you'll love (if only briefly) for the bellowing, drifting, rubber-laying eye candy that's on display, and then hate for what they do to the cars. (Warning: spoilers ahead.)

It's almost unforgivable: In Jack Reacher the title character, played by Tom Cruise, is on the run in a stolen muscle car after being framed for a murder. Evading the police he uses the beautiful red-with-black-stripes 1970 four-speed Chevelle SS like a weapon, turning the chase into a sort of muscle-car destruction derby: Nine Chevelles were purchased for the production, and only three survived filming (little known fact: Tom Cruise secretly purchased a legitimate SS 396 and kept it as his own). If you can ignore the real-life automotive carnage, however, the six-minute chase is a thing of glory: it's got impressive stunt driving with no CGI, very little editing, a pulse-quickening V8 soundtrack, and a smartly-played ending. And the movie car even manages to survive the chase, sort of, with Jack abandoning it as a thoroughly banged up but rolling – and potentially rebuildable – wreck.

The Other Guys, starring Will Ferrell, Mark Wahlberg, Samuel L. Jackson and Dwayne "The Rock" Johnson, doesn't wait even three minutes before destroying Jackson's character's blue-with-black-stripes 1971 Chevelle SS. The movie opens in the middle of a car chase, with detectives P.K. Highsmith (Jackson) and Chris Danson (Johnson) pursuing some baddies driving a black Cadillac Escalade. During the chase the baddies shoot up the Chevelle and its hood flips open, causing Highsmith to jump-crash straight through the middle of a bus, where the Chevelle gets stuck. Danson then takes the wheel of the bus, pulling off a manoeuvre that flings the ruined Chevelle, with Highsmith still in the driver's seat, towards the bad guys, taking them out in a hail of bullets and a ball of flame.

The kicker is that Highsmith gets a replacement black-with-white stripes 1972 Chevelle SS, but it almost immediately gets crushed by wrecking ball, causing him to cry out out "Ohhhhh! Second one this week!" It seems The Other Guys understand the cliche of the doomed Chevelle SS.

Being a follow-up sequel to the original Charlie's Angels film (2000) starring Cameron Diaz, Drew Barrymore and Lucy Liu, Full Throttle is too packed with plot details to explain why former Angel Madison Lee (Demi Moore) is working against the Angels. But she is, and in an effort to slow them down she blows up the white-with-black-stripes 1970 Chevelle SS Convertible belonging to Angel Dylan (Drew Barrymore). It's not the only classic car demolished by Madison, who later smashes up a Shelby Cobra 427. But there's plenty of automotive eye-candy that doesn't get destroyed: A 1967 Pontiac GTO, a Starsky-and-Hutch style 1976 Ford Gran Torino, an Aston Martin DB5, a Ferrari 250 GT Spyder, a Maserati Spyder, a Ferrari Enzo and more. And in a DVD extra the producers explain that they didn't destroy a genuine SS Convertible: they used a 1970 hardtop with a blown motor that had been hit hard in the back and "was a wreck", cutting the top off and painting it to make it look the part before blowing it sky-high.

You'd think that classic muscle cars would be safe from teen fantasy films based on Greek mythology. But no. Because everyone has a mom, right? And cool moms drive cool cars. In this case, Percy's mother's drives a bronze-with-black-stripes 1972 Chevelle SS. But while driving on a two-lane country road it starts raining cows and bad things happen, and then a minotaur appears and even worse things happen…

Action. Violence. Chinese Triads. Car chases. After a shoot-out a San Francisco tea house, War sees FBI agent John Crawford (Jason Statham) jump into his already-damaged green-with-black stripes 1969 Chevelle SS to give chase to a bad guy driving nothing less than a Spyker C8 Spyder. There's some excellent driving action, and even with a damaged front corner the Chevelle manages to make the Spyker look a little ho-hum, but then the bad guy pulls a sneaky lane change, leading Crawford to smack into a pile of road construction materials, getting airborne and crashing into a Jersey barrier. Crawford climbs out of the wreck and slams the door angrily in true Statham style, not even giving the poor ruined Chevelle a second glance.

In the B-movie style thriller short King of the Road, Brad Pitt's character Billy drives a yellow 1969 Chevelle SS four-speed with a big blower and hood scoop. The opening sequence has it drag racing a red-with-white-stripes Dodge Charger. The Charger flips and rolls, leaving some faint hope that perhaps this time the Chevelle will survive. But no. At the end of the story Billy's drag racing against a '57 Chevy and fails to see a bulldozer parked at the end of the road. He smashes into it with extreme force and then, in an attempt to take his rival (the policeman known as Iceman) down with him, Billy flicks his lighter and drops it into the spilled gasoline. Talk about crash and burn.

After a serious accident on the race track, NASCAR driver Ricky Bobby (Will Ferrell) is trying to get his racing mojo back. Somehow his deadbeat father, Reese Bobby (Gary Cole), convinces Bobby that driving blindfolded will help the process. It certainly doesn't help Reese's tricked-up 1969 Chevelle, which Ricky bounces off pretty much all his neighbours’ cars before crashing into a house. The car lives through the wreck, although it comes out looking a little worse for wear. It then stars in a nice mojo-recapturing chase sequence and, astoundingly, survives to the end of the film – probably because it wasn't in fact an SS.

In Drive Angry 3D Nicholas Cage's character John Milton has literally escaped from the bowels of hell, already smashed up a 1963 Buick Riviera, and gotten the midnight blue 1969 Dodge Charger belonging to his new friend Piper (Amber Heard) shot up and rendered undriveable (surprisingly it survived, with only missing glass and a busted radiator).

His buddy agrees to set him up with a new ride, and when pulls back the car covers on a pristine 1971 Chevelle SS 454 and a 1968 Camaro SS you just know what's going to happen next: That's right: John always favoured the Chevelle. Being already dead means John can't be hurt, but the Chevelle's not so fortunate, and after gracing the movie with its stylish presence it gets sacrificed to the movie gods in the finale, jumping through a flaming pyre (and onto a bunch of baddies) before finally getting rolled.

The good news is that a limited budget kept the production team down to three 1969 Chargers, three 1970 Chevelles and a 1964 Buick Riviera.

The Chargers all survived filming, as did two of the Chevelles. The Buick and the other Chevelle, well, not so much … 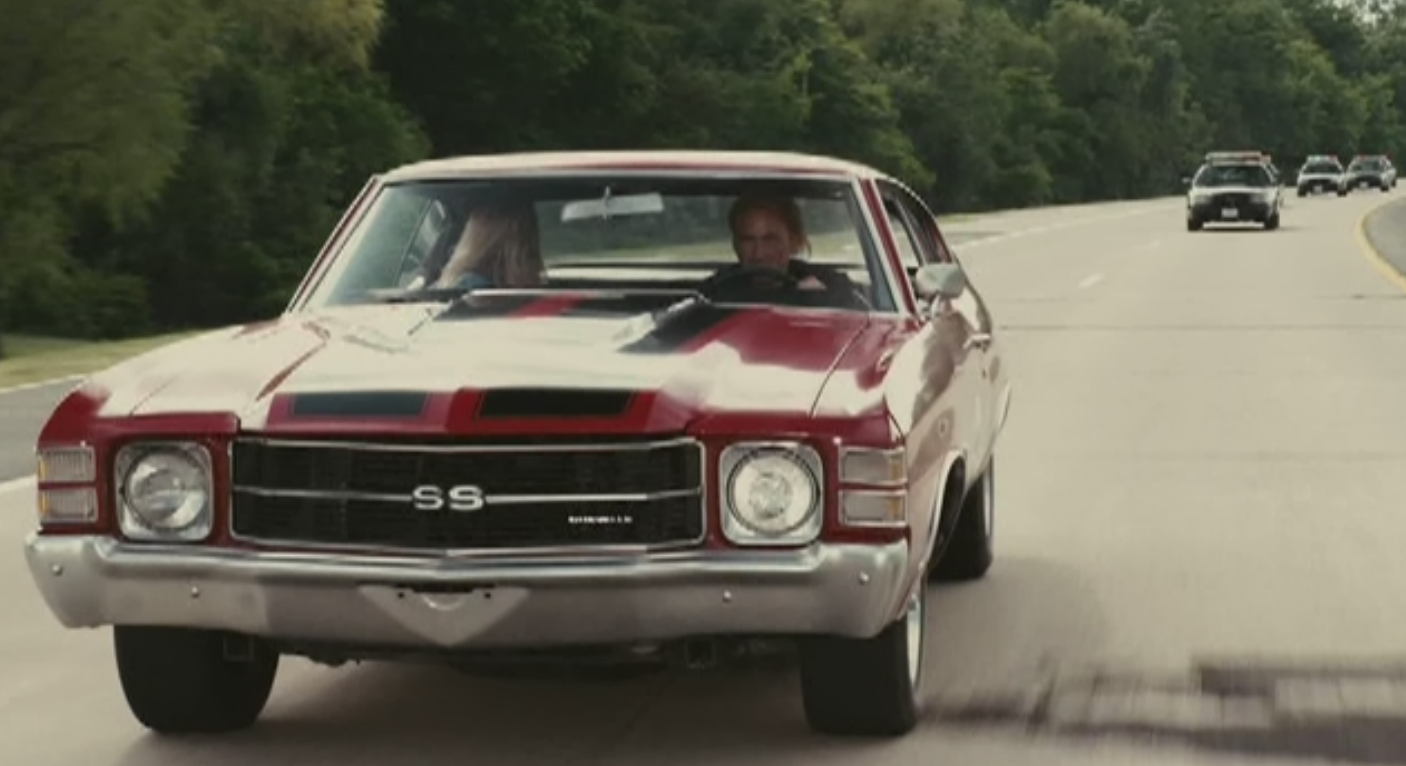 If you thought that wanton destruction of A-bodied GM muscle cars was only a Hollywood obsession, think again. Sure, the blue 1968 Pontiac GTO in CBC's Republic of Doyle isn't a Chevelle SS, but it's built on the same platform, it's every bit as good-looking, and being a GTO it's every bit as cool. Three seasons into the program the GTO had become a character in itself, a trusty sidekick to Allan Hawco's Jake Doyle, taking occasional minor damage but always getting repaired. Its luck runs out at the end of Season 3, however, when it gets stolen with a trunk full of gold, crashed into a telephone post, towed away, broken out of impound, and finally blown sky-high by an unexpected bomb.

The production company actually owned "3-1/2 GTOs": two identical blue hero cars (one for stunts and one for "other stuff" as Allan Hawco so clearly explained it), a rough-but-running red GTO in case they needed spare parts, and an old shell of a car (the "1/2" car) which was the one that actually got blown up ­– a development that appears to give the red parts car its own 15 minutes of fame, because in Season 4 Jake gets a primer-and-red work-in-progress GTO that he eventually rebuilds to duplicate his original car.