It’s gonna’ get greasy! The snow is coming, hard and fast, and it’s going to test your nerves, reduce your traction, and make it increasingly likely that you and your fellow motorists will be stressed on every drive. Grip and daylight are down, accident rates are up, and your local body repair shop is anxiously awaiting the truckloads of twisted wreckage arriving for repair in their parking lots.

So, maybe, like many Canadians, you’re presently after a used utility vehicle that can emerge unscathed after the winter months, to feel the warm springtime sun on its grille.

If that’s the case, consider the following recommended used crossovers for winter survival, across three popular price points. Each one delivers confidence, winter-busting features, and look to be a solid used vehicle bet, meaning you’ll save money on repair bills, which you can use for wintertime activities instead.

After all—who really wants to stay in when the weather turns cold? Why: Because a healthy and well-maintained Toyota Matrix with a thumbs-up from a mechanic should offer above-average reliability, space, and fuel economy for years to come. Most used copies of the Matrix are front-wheel drive, though AWD was available, and used copies, depending on the year and mileage, fall right into this price range. Look for a flexible cargo hold, automatic transmission, four-cylinder power, and the full range of Toyota STAR safety gear, standard from 2011. Owners typically rave about the on-board space, sporty looks, good fuel mileage, and overall blend of performance, efficiency and utility. The words ‘perfect size’ come up fairly frequently, too.

The Test Drive: Have a mechanic inspect the used Matrix’s CV joint boots, which protect this driveline component from nasty debris and dirt. These rubber boots have a reputation for premature wear in the Matrix owner’s community, and higher-mileage units are suspect. It’s considerably less expensive to change the boot than the entire CV axle, so be sure to address this issue if it’s detected.

Note that oil consumption on some 2009 Matrix models was well documented by the owner’s community. Where possible, opt for a 2010 or newer model, which had the issue fixed. On AWD-equipped Matrix models, be sure to ask a mechanic to check beneath the car for signs of fluid leaks and bad seals. As it goes with any used car, a full fluid change, including AWD system fluid, is great for peace of mind if the machine’s service history is unclear.

Finally, confirm proper operation of all window switches, as some owners say they become sticky and possibly seize over time.

2008–2012 Ford Escape: Big on space and flexibility, and abundant in the used crossover market, you’ll find a nicely equipped, few-year-old copy of this popular model tucked well into the price range. Automatic four-wheel drive, a commanding driving position and generous ground clearance helped Escape tackle winter, and four or six-cylinder power was available. Model year 2009 introduced newer, more powerful engines, and Escape looks to offer solid reliability. Just be sure the used copy you’re considering gets a thumbs-up from a Ford mechanic for its automatic transmission and the condition and levels of all fluids before you buy. Have the 4WD system inspected for signs of leakage too, just to be safe.

2008–2013 Nissan Rogue: Rogue’s award-winning blend of styling, confidence, feature content and sporty driving characteristics, as well as its proven engine and lockable AWD system turn the dial up on winter driving peace of mind. Owners typically rave about a comfortable ride, plenty of features for the money and the Rogue’s unique design. In one online forum, virtually all owners listed ‘fuel economy’ under the ‘Pros’ section.

On a test drive, kill the radio and listen for unwelcome noises from the transmission, including grumbling, grinding and popping. These should be checked out by a Nissan mechanic, and may be fixed with updated transmission software. Confirm proper sunroof operation, noting that failure of the sunroof to move fully through its range of motion could be caused by an improperly fitting wind deflector. Finally, while driving, note that a jingling or metallic pinging sound as you travel over bumps could be caused by a loose exhaust hanger, which is easy to fix. 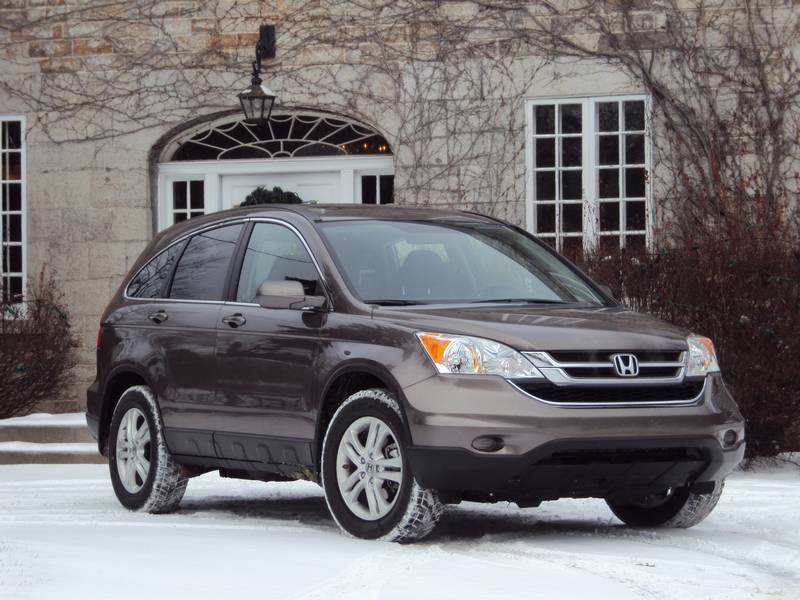 Why: Because CR-V’s bigger-than-you-think interior, proven reliability and residual values, and just-right blend of performance and mileage culminate in this generation, which is scattered throughout our price range with reasonable mileage and pricing. Top safety scores, high levels of versatility and an on-demand AWD system attracted shoppers to dealers for test drives, with a comfortable ride and Honda’s reputation for reliability sealing the deal. Look for an EX or EX-L for a top-line experience. A 2.4L four-cylinder engine was standard, with up to 180 horsepower. The CR-V’s driving position, surprisingly spacious interior, abundant storage facilities and maneuverability are highly rated by owners.

The Test Drive: Ensure the CR-V you’re considering tracks straight and smooth down the road, and question any pulling or vibration felt through the steering, which could be evidence of a front-end issue with steering or alignment.

Triple check for proper operation of the locks and door handles on all doors, and the hatchback as well. Also, note that the air conditioning system should blow ice-cold air almost instantly after it’s engaged. If that’s not the case, a bad AC compressor may be to blame.

A whining noise during low-speed steering could be caused by a worn-out power steering pump, or low power steering fluid level, which will require further investigation. Finally, noting that some owners have complained of excessive oil consumption, test drivers are advised to check the oil level and condition on any used model they’re considering.

2007–2014 GMC Yukon Denali: Here’s an interesting choice for your winter-busting sports-ute dollar. Packing world-class luxury, enormous room, and standard power from a great big V8 engine, a well-maintained Yukon Denali makes a compelling choice where luxury, size and space are priorities. In this price bracket, you’ll be shopping an older, higher-mileage unit, though a mechanical two-thumbs-up from a technician means you can buy with confidence.

Equipped with an up-sized V8 engine, Denali didn’t suffer from well-documented oil consumption issues like other Yukon models. The Denali also gets a decision-free AWD system, not a driver-activated 4x4 system, making it more foolproof in the snow for some drivers. Confirm all high-end features work properly, check the carpeting for signs of moisture caused by a leaky sunroof, and confirm that the brake lights and cruise control work properly, and then head to your local GM dealer for a pre-purchase inspection.

2009–2014 Subaru Outback: Plenty of used Subaru Outback models fall into this price range—each packing generous passenger volume, even more generous cargo space, and one of the best AWD systems on the road. Proven powertrains and a positive reputation for residual value make this one a popular choice for active families, and a car-like ride and maneuverability help round out the appeal. Most models will have a 170-horsepower four-cylinder boxer engine.

Check for proper operation of the headlamps and taillamps, as some owners have reported frequent bulb failure, likely stemming from a light sensor circuit, or a wonky alternator that creates voltage spikes. Have noisy power steering pumps checked out by a mechanic, and pay close attention to unwelcome noises from the suspension on rough roads, which should also be investigated. Finally, confirm that the hatchback release button works properly, several times, and be sure the driver’s seat lumbar support lever works, and isn’t broken off inside of the seat. Why: Because you’ll find heaps of nicely-loaded, few-year-old Sante Fe models with plenty of factory warranty remaining, all over this price range. Generous feature content, a slick and fast-acting AWD system, and a plethora of winter-busting implements are on offer. Look for four-cylinder power on most models, turbocharged or not. The extended-length Santa Fe XL got a V6. A premium audio system, panoramic glass roof, automatic climate control and plenty more were available—and shopping a few-year-old model in this price range provides access to a fully-loaded model with lots of warranty, for thousands less.

The Test Drive: Check the condition of consumable parts, like the tires and brakes, and have a dealer service manager confirm that all software updates and recall work are up to date. Confirm proper operation of all on-board electronics, from the Bluetooth to the power tailgate, if equipped. Check the unit’s mileage against its service schedule, calling any overdue maintenance into pricing negotiations.

2007–2013 BMW X5 Diesel: Depreciation has knocked this once-pricey luxury ute down into affordable territory. Some units are listed from the mid-twenties with less than 100,000 kilometres. High-efficiency, torque-monster performance, a clever AWD system and all the luxury must-haves were on board, as was available 7-passenger seating. Seat comfort and a solid feel round out the package, and many owners note pleasing performance from the xenon lighting system.

If not shopping a CPO model, have your used candidate inspected at a BMW sales centre, focusing on a full computer scan, a charging system scan, and a check that all software updates have been carried out. A full check of the cooling system for signs of coolant leaks should be considered mandatory. A healthy used X5 Diesel can be a heck of a deal, but spend a few bucks to ensure the model you’re considering is healthy, and opt for any extended warranty coverage that might be available.

2007–2013 Acura MDX: At the upper end of this price range, you’ll find no shortage of low-mileage, few-year-old copies of the last-generation MDX, which earned fame for reliability, sensibility and residual value. Standard AWD, V6 power and a just right blend of performance and efficiency were loved by owners. Newer models got advanced hazard-detecting safety systems, and the MDX Elite was the top-grade unit. A “Technology Package” added features like a power tailgate, rearview camera, premium stereo system and navigation, too. Seating for up to 7 was available.

Ask the seller if and when the timing belt was last changed to be sure. If the belt is overdue to be replaced, call it into pricing negotiations, noting that the job can cost $1,000 or more. Confirm proper operation of all power seat adjustment, heating and memory functions, and be on the lookout for a rare but well-documented torque converter problem, evidenced by very hard shifting or ‘slippage’.