Photos by Justin Pritchard, and Courtesy of the Manufacturers

Brakes are one of the least glamorous yet most important parts of your ride. Acceleration, torque and horsepower might be the go-to figures touted when boasting about your ride, but ultimately it’s the brakes that keep all of the above in check. Nobody spouts stopping distance, rotor diameters or advanced anti-lock functionality when bragging about their machine, but you can bet that when it comes time to stop in a hurry, that often-overlooked braking system will suddenly become the vehicle’s most important feature, combined with the grip delivered by tires, which is why winter tires are key in the snowy season.

Here’s a closer look at the often-overlooked braking system, how it works, and some of the neat tricks it can do. 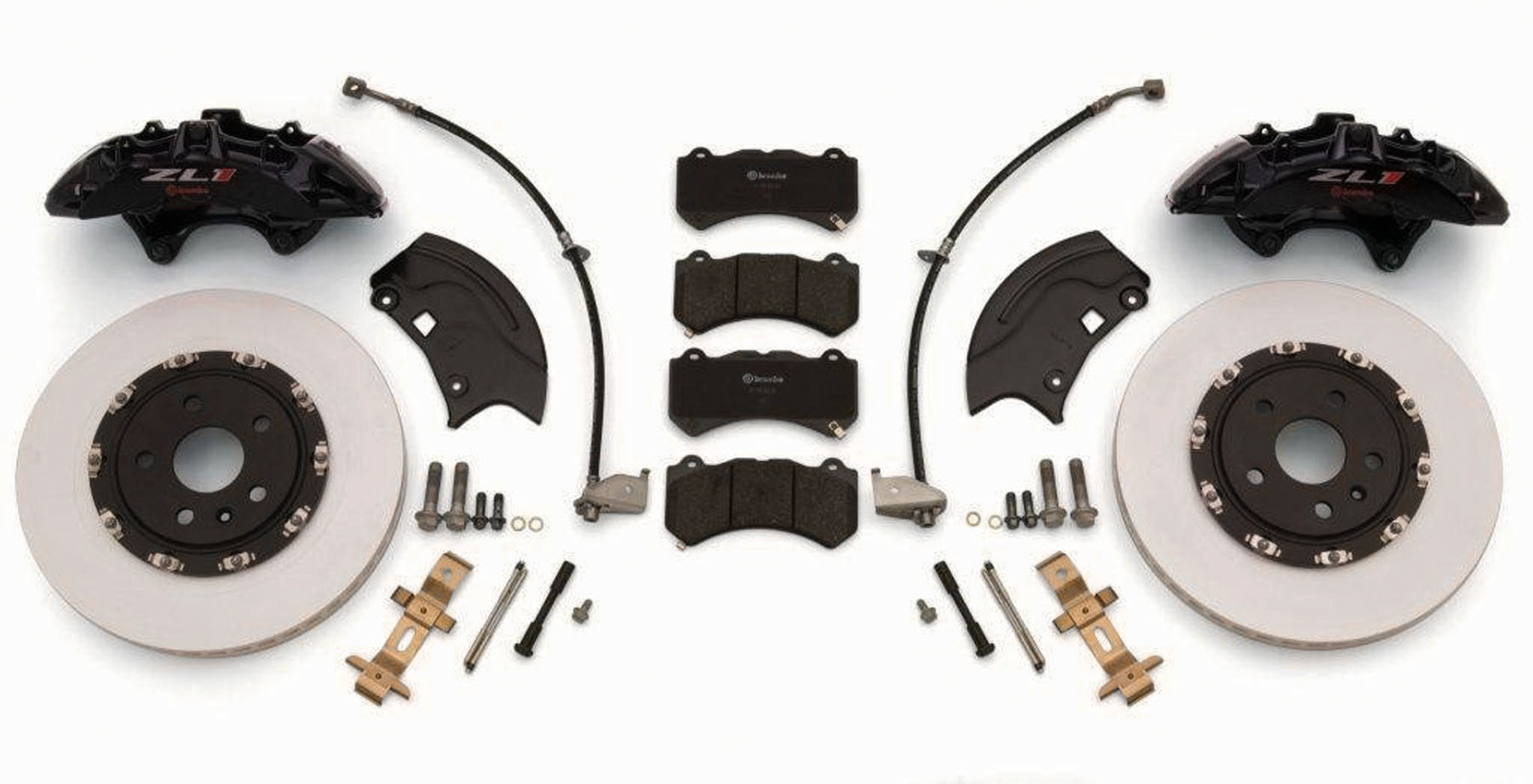 Used to be that cars had drum brakes on all four wheels. The premise? A steel drum rotated with the wheels around a simple mechanical or hydraulic system, fixed in place, that pressed brake ‘shoes’ into the inside of the rotating drum assembly when the brakes were applied, creating friction, heat, and deceleration.

That was then. Today, it’s the disc brake system that’s largely the standard. Disc brakes still work on the principle of using friction to turn momentum into heat—though stopping power is generated by pads clamping over a rotating disc that’s bolted to the wheel. Most cars now use a disc brake system at each wheel.

Here’s a disc brake system, naked. The round, shiny bit is the brake disc or rotor. The assembly covering the front of it is the caliper. The pads, which create friction for stopping, are inside, between the body of the caliper and the brake disc. Look closely, and you can see a little bit of text printed on them. See the threaded posts sticking out?  The car’s wheel bolts to those. The wheel and the brake disc spin as you drive, the caliper and pads don’t. In a car with four-wheel disc brakes, there’s a similar setup just behind each of the car’s wheels. 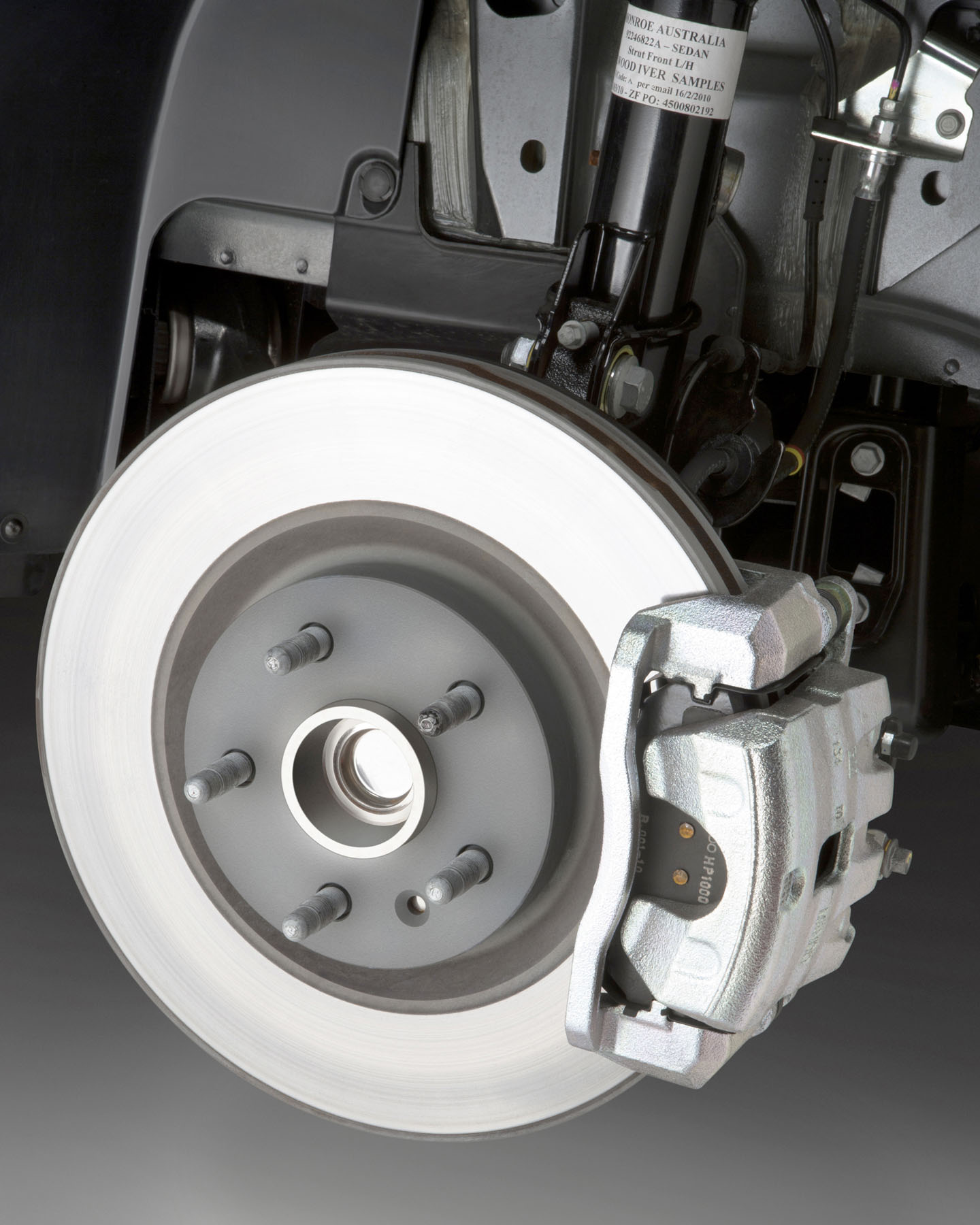 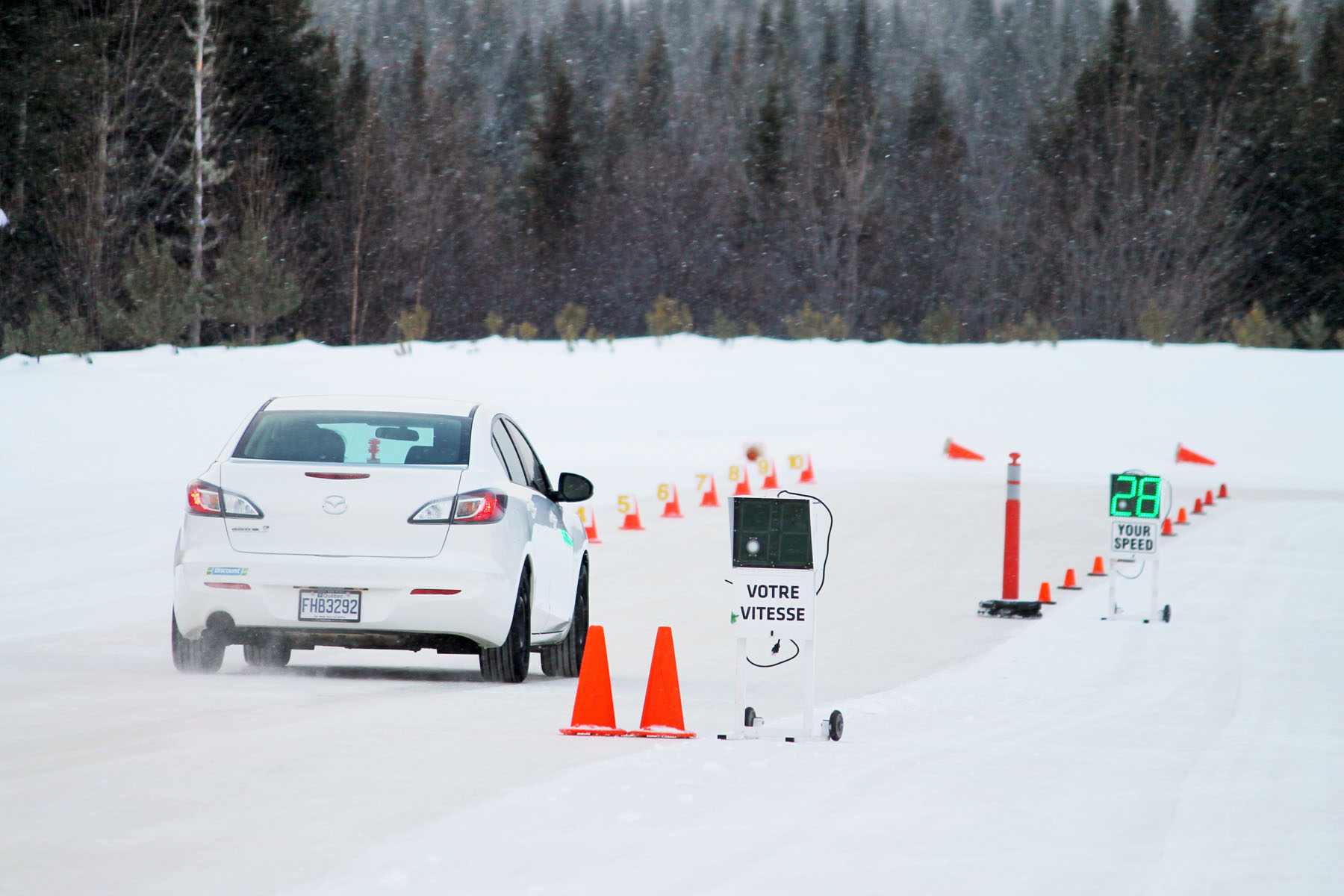 In the good ole seventies or so, the elemental Anti-Lock Braking System (ABS) came into play, effectively allowing the brakes to be ‘pulsed’ at a high frequency during emergency stops. Compensating for a driver’s natural tendency to simultaneously smash the brake pedal and rip the steering when faced with a panic situation, ABS allowed the vehicle to remain steerable during a panic stop, rather than locking its wheels right up and plowing head-on into the hazard the driver was trying to avoid. Virtually every new car today has ABS. It’s typically controlled by a computer module, a network of sensors, and a hydraulic pump that provides the appropriate fluid pressure and high-speed pulsing action. Even on icy conditions like those pictured here, ABS allows a car to simultaneously brake and steer. 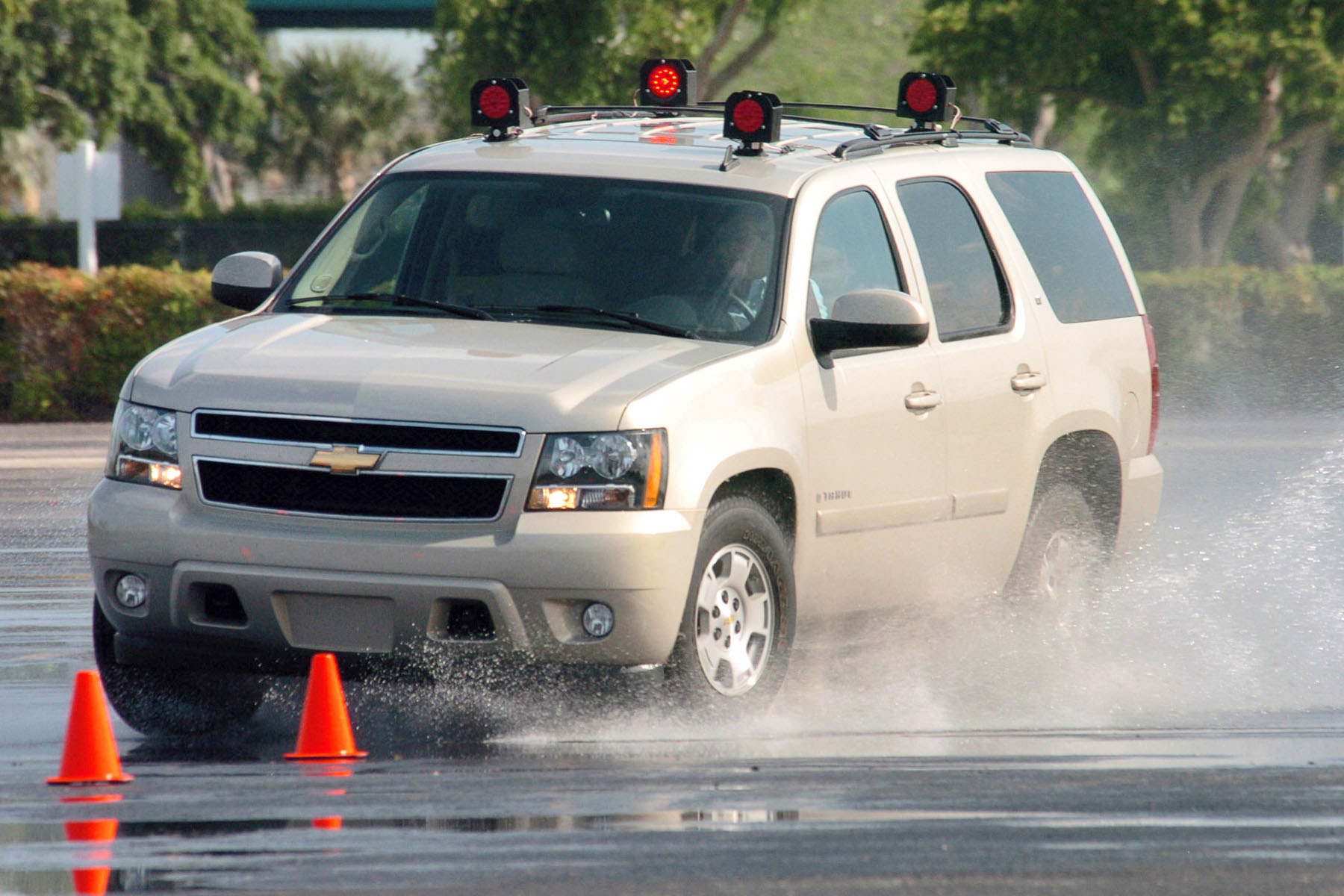 The ABS braking system serves as the core for a vehicle’s Electronic Stability Control (ESC) system. Using the same network of sensors, and the same hydraulic system, the ESC computer can detect skidding and slipping, and direct the braking system to apply brakes to as few as one of the vehicle’s wheels. This causes deceleration, and a finely tuned transfer of weight and a shift in inertia that help get the car out of a slide. Key to the effectiveness of the brake-driven ESC system is that it reacts faster, and far more precisely and consistently than a human driver can to a dangerous slide. Today’s brake-driven ESC systems are so effective, they can often neutralize a skid that wasn’t even perceptible to the driver yet. 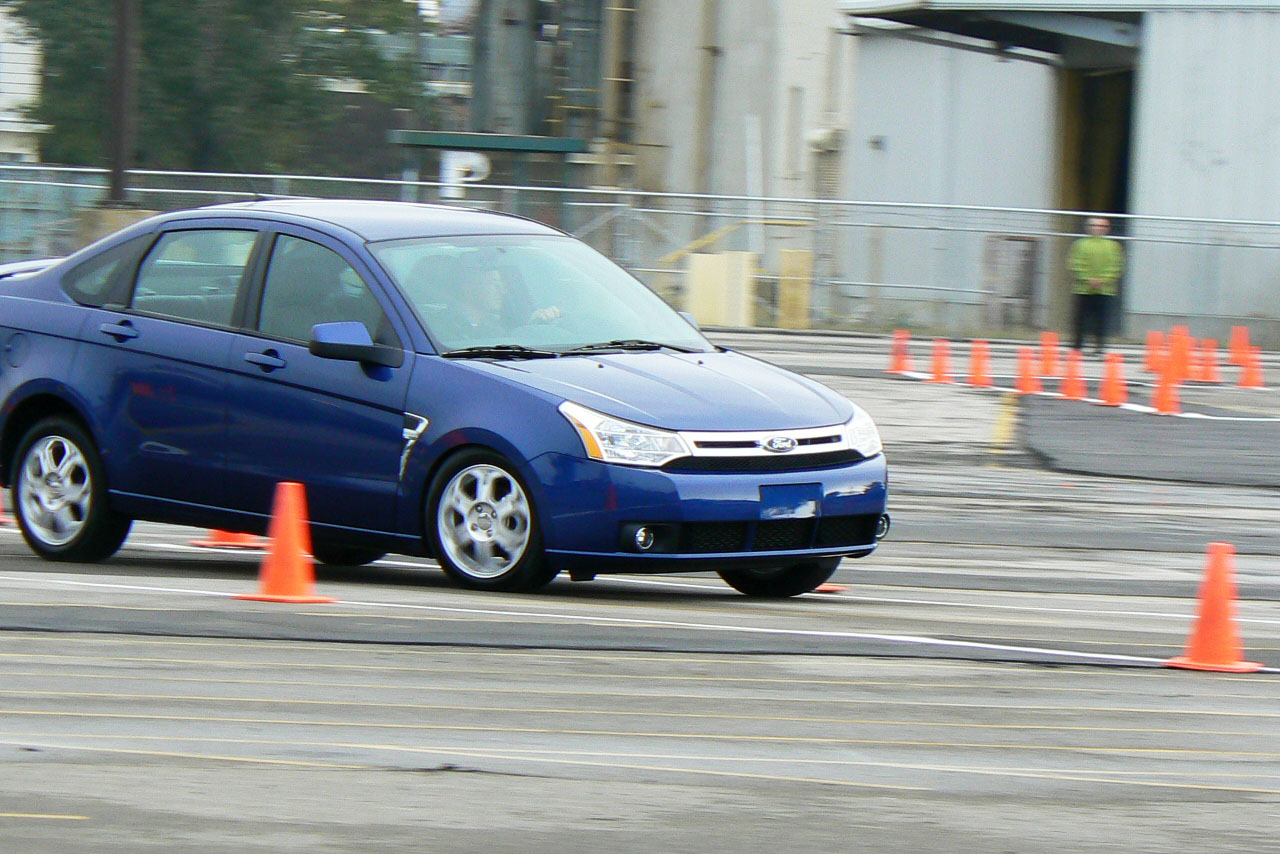 Brake Assist or Panic Brake Assist has become popular since launched by Mercedes-Benz in the early nineties. The gist is simple: even if you need to stop quickly, you probably don’t want your double-double to wind up all over the windshield, or the stuff in your back seat to whack you in the back of the head, so you’ll err on the side of caution when applying the brakes, giving the pedal lighter pressure than required to maintain your comfort level. Then, as you get too close to the hazard, realizing you need more braking force, you apply more pedal, probably a bit too late, and have an impact. Panic Brake Assist helps drivers stop sooner by detecting a panic stop and boosting braking system power accordingly. 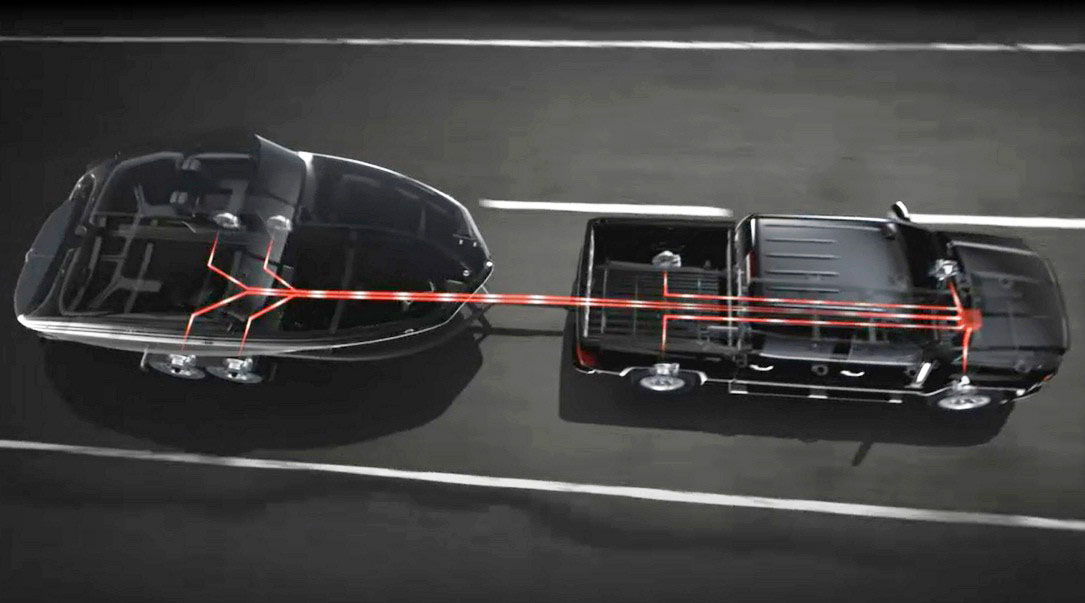 Trailer Sway Control (TSC) builds on the ability of your ride to manipulate vehicle handling characteristics using the brake system. When towing, special sensors detect the dangerous action of a swaying trailer, and create a special brake pulse pattern in the tow vehicle to counteract it. This is automatic, highly effective, and starts to happen at a point where the driver isn’t even likely to know the trailer is beginning to sway. Translation? With a few extra sensors and some computer programming, control of the vehicle brakes, on a wheel-by-wheel basis, can increase safety while towing, too. 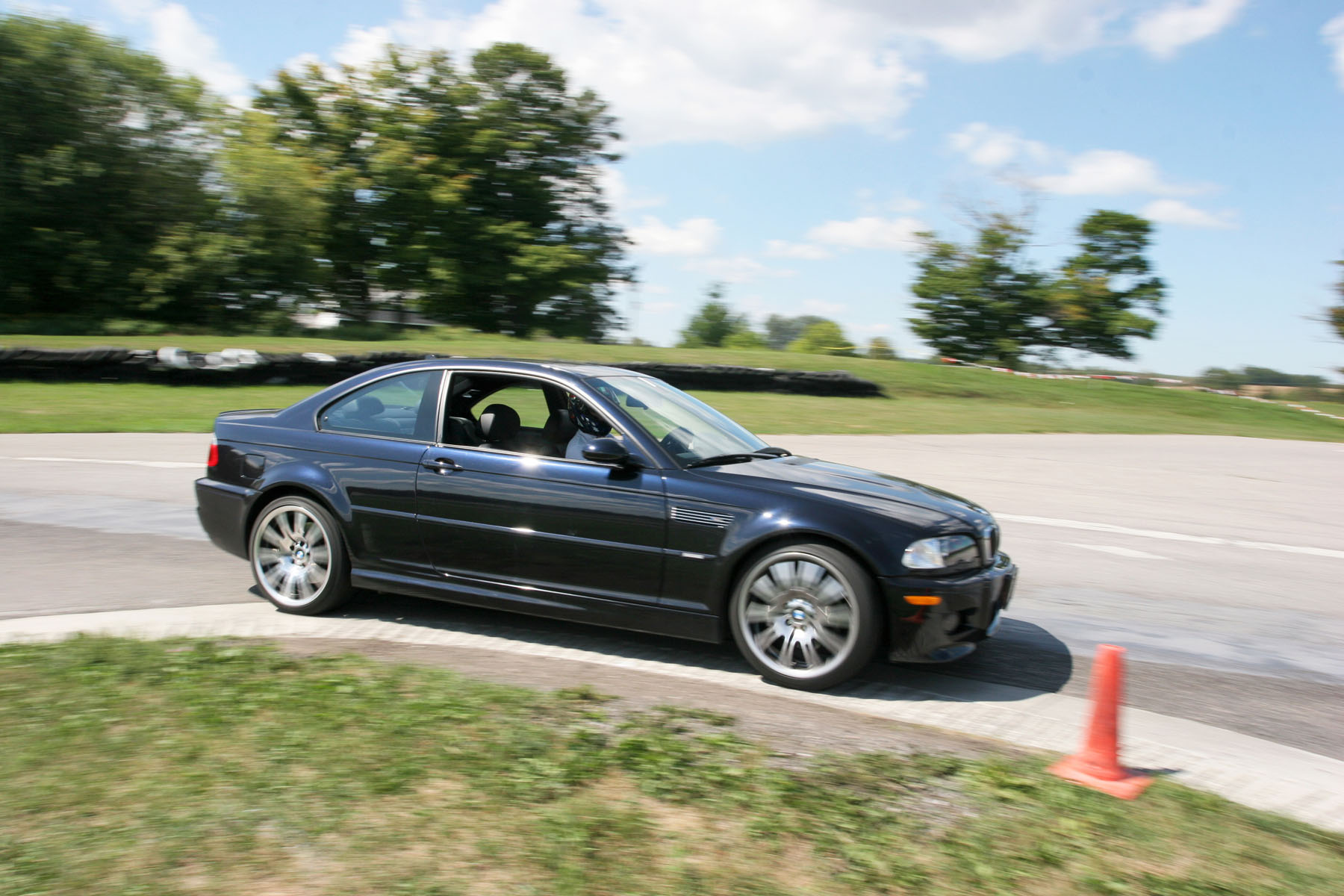 Driving on a race track or towing can push the vehicle’s brakes to their limit, thanks to the intense heat generated. For these reasons and more, brakes can sometimes get so hot that they don’t work properly. Largely, that’s because the heat begins affecting the viscosity of the fluid responsible for transmitting your pedal input to the brake calipers. From the driver’s seat, overheated brakes are evidenced by a spongy pedal, longer stopping distances, and more pedal travel until things cool off.

Fading Brake Assist can help, by providing more consistent pedal feel and stopping power when things get hot. In effect, the system monitors the correlation between the brake pedal application and vehicle deceleration, ramping up stopping power automatically via increased brake pressure in situations where the brakes are fading.

Another way to combat dangerous brake system overheating is to build the brakes themselves to be more heat resistant. Some vehicles have holes drilled into the brake rotors, special vents built into the body to direct cool air onto the braking system components, or even brake discs made out of exotic materials that don’t get as hot when you work them hard. See the little holes on the brake disc in the picture? Those help the rotors dissipate heat. Look closely at the rough pattern to the brake disc, too. Those little flecks are a ceramic composite, built into the disc, to help it resist heat buildup. 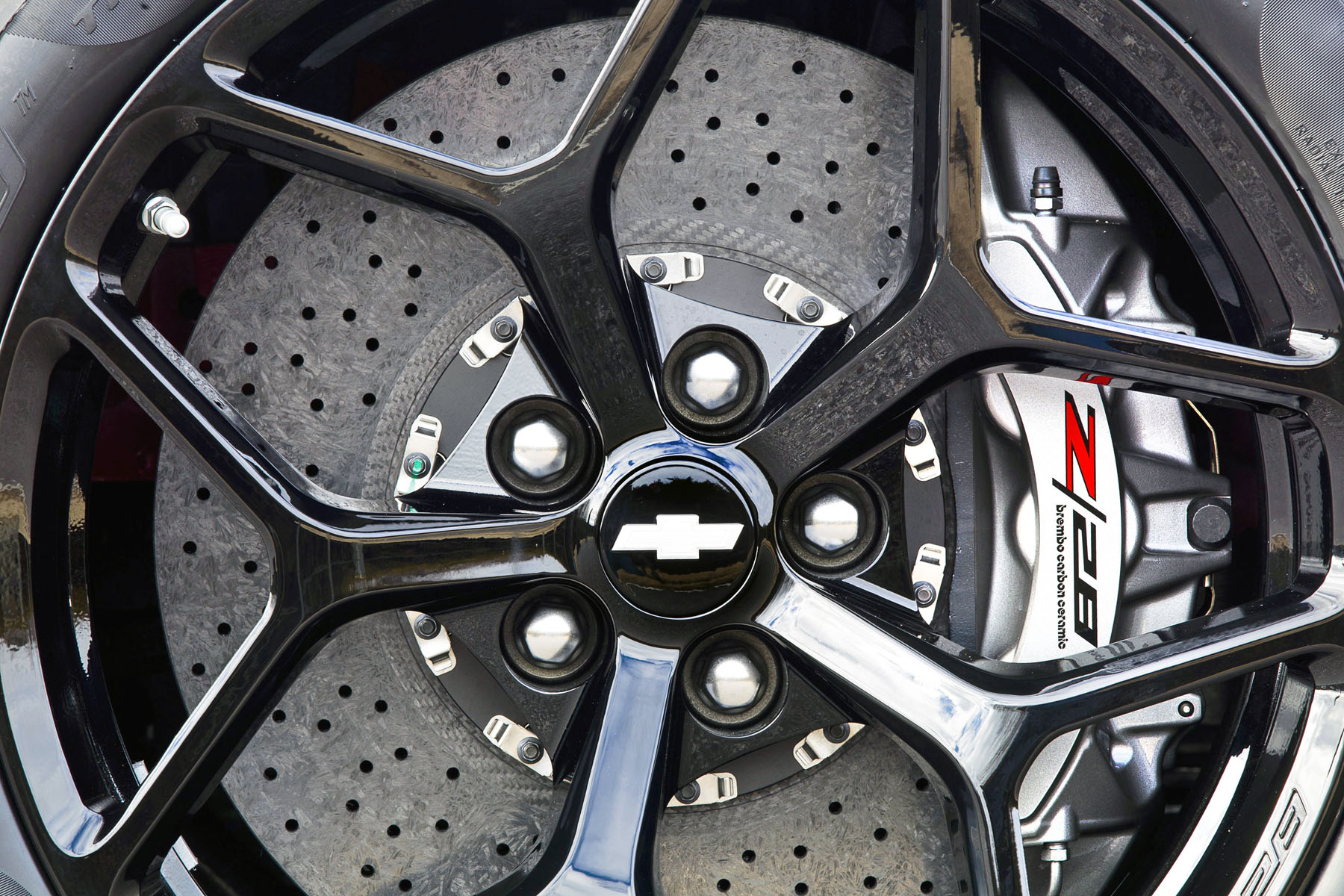 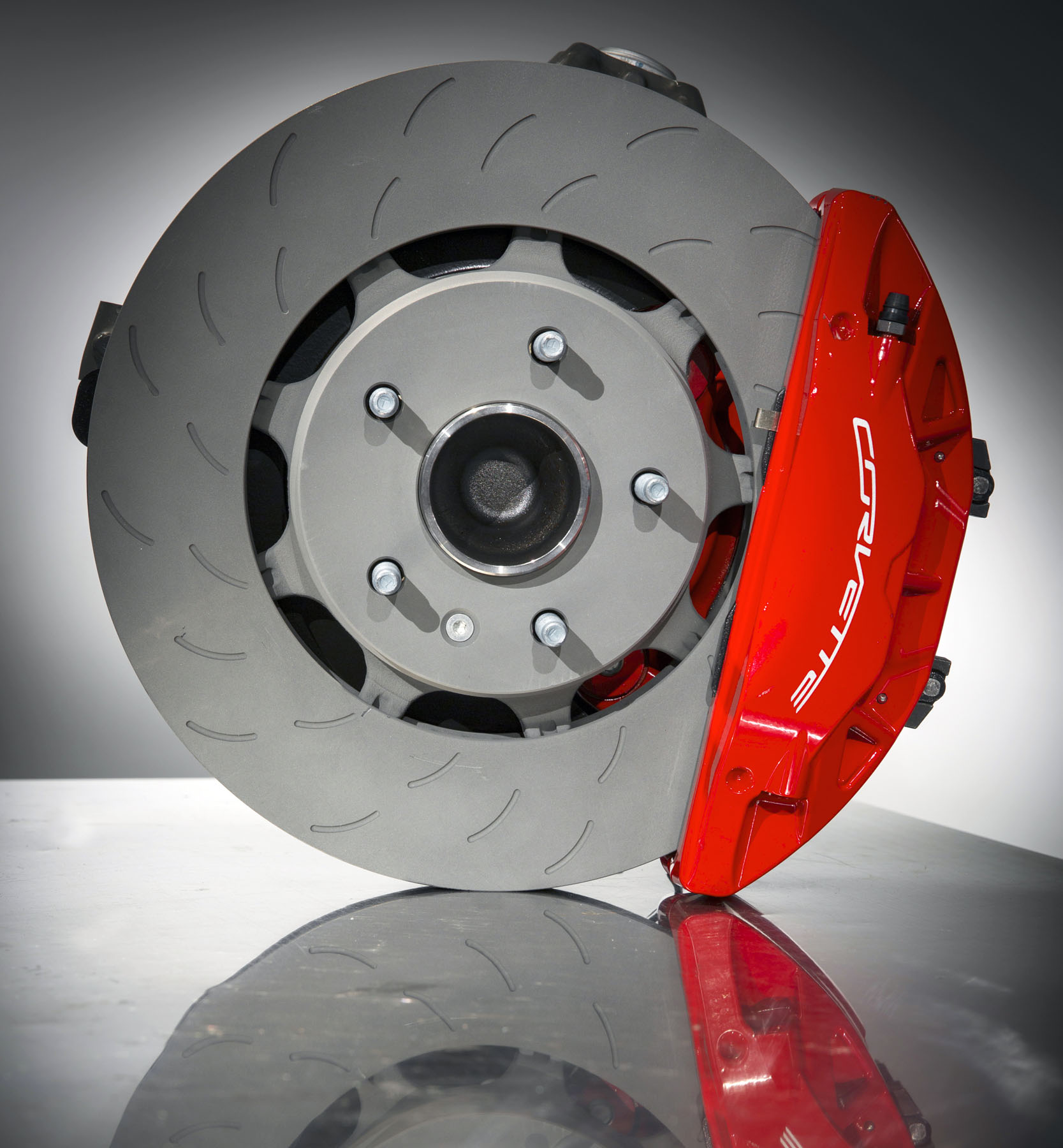 Check out the brakes on the new Corvette. They have a clever cooling system built into the brake disc itself. Notice how the disc surface seems to ‘float’ over that central spoked hub, with notches between the spokes? Air flows into those notches as the wheels and brake discs turn at speed, and it’s ejected out of vents at the outer edge of the disc, taking built-up heat away with it. 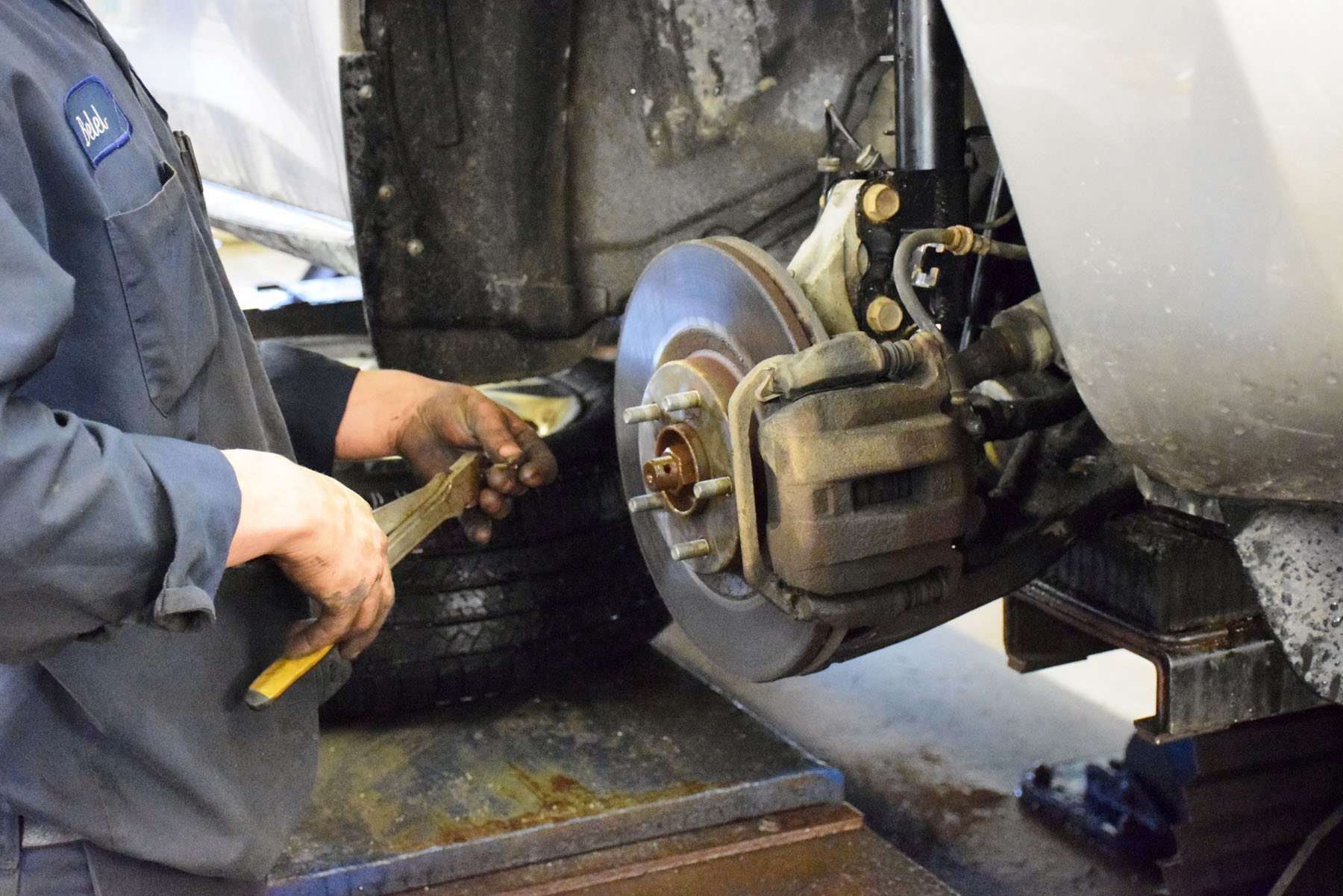 Remember that whatever you drive, proper brake system maintenance is key to the long life and effectiveness of all components. Be sure to have your braking system inspected regularly, as outlined in your owner’s manual, for maximum peace of mind. The brake discs, as well as the pads that clamp down on them, are wear items, and will eventually require replacement to maintain brake system performance. The brake calipers, which provide that clamping action, can wear out eventually, too. Brake fluid should also be changed regularly, as it eventually wears out and works less effectively. Your mechanic has the scoop.