Persistence is important if Hyundai wants to turn its N performance sub-brand into a household name akin to Mercedes-AMG or BMW’s M division.

The 2021 Hyundai Sonata N Line is the automaker’s latest attempt to appeal to enthusiasts when it comes to performance, with a peaky powertrain stuffed under this midsize sedan’s hood. Whether it’s the right vehicle to bring Hyundai’s sporting intentions to the masses, however, is another question altogether.

Next up With a Capital N

A few years ago, Hyundai introduced lukewarm versions of its Elantra compact, followed by the Veloster N hardcore hot hatch – a car that impressed just about everyone, and put Hyundai on the map of performance-minded mainstream automakers. To keep this momentum going, more products are on their way in both slightly more civilized N Line and full-fledged N guise. This performance-oriented Sonata is the first.

While the midsize Sonata already offers two engine options – naturally aspirated 2.5L or turbocharged 1.6L – neither could exactly be considered high-output. This left Hyundai without an answer to the V6-powered Toyota Camry, turbocharged Subaru Legacy and Mazda6, or the Honda Accord that borrows its engine from the Civic Type R.

With the Sonata N Line, the striking-looking sedan gets its powerful variant. Hyundai packs a 2.5L turbocharged four-cylinder under the hood that boasts 290 hp and 311 lb-ft of torque – over 100 hp and torque more than the 1.6L turbo that powers the majority of Sonata models.

Peak torque lasts until 4,000 rpm, which is a bit soon in the rev range for it to taper off, but the sharp-shifting eight-speed dual-clutch automatic transmission works hard to keep the motor in its ideal powerband. It swaps gears with guts and echoes the attitude of a real performance vehicle, especially when you use the paddle shifters or one of the two sport-oriented drive modes.

That aura is the identifying element of the Sonata N Line. This isn’t just a more powerful Sonata – it’s redesigned for a more engaging drive that’s been hard to find in most mainstream midsize sedans. Only the Camry V6 with the TRD package is close to being comparable to this version of the Sonata, but the Korean automaker goes the extra mile with features like launch control, a new exhaust note, and an active sound system that projects amplified engine noises through the speakers. There are a few settings for this feature, so those turned off by the artificial tones can simply disable the system.

All the extras under the hood go along with other performance improvements to the steering, suspension, and brakes, which are unexpected but not unwelcome. For example, the N Line has a rack-mounted electric power steering system rather than the usual column-mounted assist on more pedestrian Sonata models. The N Line’s steering is quick, active, and engaging for a midsize sedan, so consider this mission accomplished.

Hyundai stiffened up the rear springs by five per cent to help to make the vehicle feel more lively, while the front and rear stabilizer bars have been beefed up by five per cent and 18 per cent, respectively. This may work for a vehicle that hits the track regularly or is mostly driven on smooth roads, but the N Line is noticeably stiffer and may be too harsh for the average commute.

The brakes get an improvement as well, marking the final check in this holistic upgrade. The larger rotors and improved heat dissipation suggest the vehicle will stand up to the rigours of windy back roads or a potential track day. (On that note, while other markets get Pirelli P Zero tires wrapped around the 19-inch wheels, Canadian models get all-season tires rather than a super-sticky summer compound.)

On paper, everything lines up. The N Line has power, handling upgrades, and a speedy transmission. Put it all on the road, and the vehicle meets most of its potential. When you put your foot down, the front wheels scream in agony, spinning without any grip. It almost makes you wish for all-wheel drive, as this power would likely result in an impressive sprint off the line.

If the front wheels had any grip, the Sonata N Line would be plagued with a ton of torque-steer, wrestling your hands out of any driving enjoyment. Instead, you get a tire-blistering sideshow. It’s goofy, and it feels like a waste.

When you’re not matting the throttle, you’ll notice a few other irregularities. There are strange slurpy induction noises, a stiff suspension that gets bullied by broken pavement, and the occasional gear change hiccup that all muck up what could be a truly sporty sedan. For now, it feels unrefined. Hyundai was clear that we tested early production models, but I’m not confident a break-in period or further software tuning can help smooth out these admittedly small concerns.

Stylish and Filled with Features

That’s a shame because if the N Line drove as sharp as it looked, it’d be an all-star. My model wore a spicy red paint finish and N Line-specific 19-inch wheels. The front and rear-bumpers are exclusive to this model, and you’ll notice a black rear spoiler and quad chrome exhaust tips that completes the sporty look. [It’s too bad the catfish face wasn’t made to look a little less, well, fishy. – Ed.]

There’s also plenty of safety and driver assistance technology, helping make it easier to manage on the road. The highway driving assist is a confident combination of adaptive cruise control, lane-keeping assistance, and automatic braking for curves. The forward collision alert can detect cyclists and even works in intersections with limited visibility. Other tech includes the rear cross-traffic alert system, blind-spot monitoring, and automatic high-beam assistance.

All of this content, power, and performance comes in at $37,999 before delivery charges. The V6-equipped Toyota Camry XSE is $36,540 and sports a bit more power and feels a bit more refined, but lacks much of the technology that the Sonata boasts, like the wireless phone charger, upgraded sound system, and HUD. If you want it all with a sporty ride, the Sonata N Line is the way to go.

The numbers all line up, and sedan shoppers looking for a bit more engagement will find it in the 2021 Hyundai Sonata N Line. With a stiff ride that’s less refined than the normal Sonata, it’s fair to assume that this isn’t a car for everyone. However, it’s an important part of Hyundai’s plan for its N sub-brand, as more and more models are on the way. If they come in quick succession with stats like this Sonata, that N name will become a household name in no time. 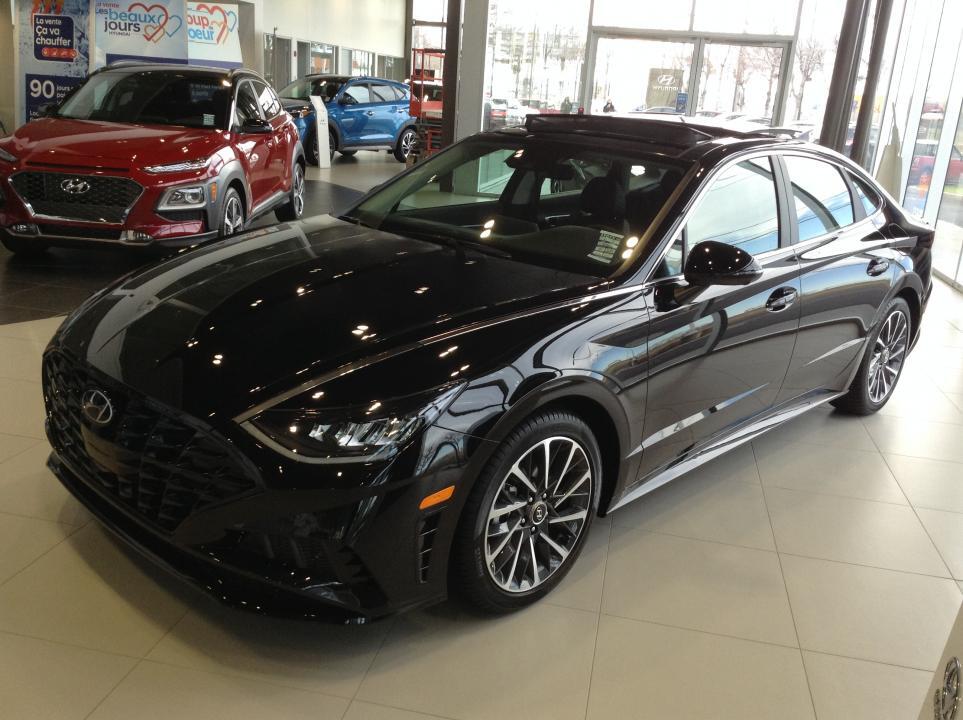 Comparison Test: 2018 Honda Accord vs Toyota Camry vs Hyundai Sonata