It’s hard to think of a Jeep without conjuring images of a big, brawny SUV. That’s in stark contrast to the Jeep Renegade, which packs its rugged looks and surprising capability inside city-friendly dimensions.

Much like the Jeep brand, the name of the Chevrolet Trailblazer might bring to mind a big and clunky SUV. Yet the familiar name was revived for use on a subcompact crossover that competes directly with the likes of the Renegade.

From certain angles there are shades of the iconic Jeep Wrangler crafted into the Renegade’s design. Unapologetically boxy, the Renegade maintains this profile, but when viewed from a different perspective the proportions can appear as if they’re a bit off, breaking the illusion that you’re looking at a smaller Wrangler. However, you can’t dismiss the effort that Jeep’s design team put into injecting the Renegade with great little details, like the X shapes in the taillights, the red tow-hooks on Trailhawk models, and Easter eggs like the old-school Jeep silhouette on the windshield.

The interior of the Renegade emphasizes the connection to its bigger siblings. Controls are large and rubberized, as if they’ll be caked in mud from a hardcore off-roading session. Other buttons can feel cheap and flimsy, while items like the signal stalk feel hollow and far from the standard set from other Jeep models.

While the Trailblazer we have here is done up in a vibrant shade of teal, we have a bit of difficulty imaging how attractive the crossover would be without the extra infusion of style. The profile is common among other crossovers, but the Trailblazer features a contrast-colour roof, modern-looking LED headlights, and an aggressive-looking grille. It’s far more bland around back, however.

Inside, the Trailblazer features a buttoned-down cabin that’s easy to operate. Controls aren’t as oversized or cheap feeling as they are in the Renegade, and Chevy goes the extra distance with the RS trim that gets extra badges and stitching in the cabin to remind you that you’re riding in a top-tier model. While both vehicles feature sporty-looking red accents, the Trailblazer uses only leather-trimmed seats, while the Renegade features full leather upholstery.

The Insurance Institute for Highway Safety (IIHS) awarded the Renegade a Top Safety Pick rating, its second-highest honour. Unfortunately, the Trailblazer hasn’t yet been tested by the IIHS, so there’s no rating yet. However, both of these crossovers offer a wide range of safety equipment, ensuring that even small vehicles can feel secure.

The Renegade offers lane-departure warning, blind-spot monitoring, forward collision warning with automatic emergency braking, adaptive cruise control, parking sensors, and self-parking assistance. However, none of these features are standard on the base model; you’ll have to spring for a higher trim level – and some options packages – to get all of these safety features and driver aids.

The Trailblazer has forward collision warning and lane-keeping assistance as standard equipment. Buyers can also get blind-spot monitoring, rear cross-traffic alert, rear parking sensors, adaptive cruise control, and a digital rearview mirror. The concept behind this feature is that the camera has a wider angle and offers a less obstructed view of what’s happening behind the vehicle. Chevrolet also offers its OnStar telematics system, which can alert authorities in the event of an emergency.

Both of these crossovers offer several surprising features you wouldn’t normally expect in vehicles of this size or price. The Renegade, for example, has some off-road-oriented drive modes. Selecting one will adjust the way the all-wheel drive and traction control systems operate, making the vehicle more confident to pilot on different surfaces. That’s the sort of stuff that makes a Jeep stand out from anything else, and even though they’re used most around town you have to applaud Jeep for engineering that kind of capability into even its smallest vehicle.

Elsewhere you can find handy convenience and comfort features, including standard heated seats, an available dual-pane sunroof, rain-sensing wipers, and remote start. Jeep also offers one of the best infotainment systems in the business. The Renegade comes with Uconnect4 run through either a 7.0- or 8.4-inch touchscreen. The system is easy to use and customize, and features Android Auto and Apple CarPlay support.

The Trailblazer also has a few eye-catching features. While it doesn’t have any off-road drive modes, it does have a switch that engages its all-wheel drive system, as well as a sport drive mode. Additionally, the infotainment system was easy to use, and boasts wireless Android Auto and Apple CarPlay support, making the features even more convenient to use. Higher trim models use an eight-inch touch display, while more basic models use a seven-inch screen. I was surprised by the power tailgate, as not all vehicles in this class offer it, and beyond that, Chevrolet smartly illuminates a light-projected bowtie on the ground to show you where to kick your foot to operate the hands-free hatch. Like the Renegade, you can find heated seats, a large sunroof, and remote start on the Trailblazer, and our tester featured automatic climate control, a wireless phone charger, and even a USB-C port.

The square dimensions of the Jeep make it fairly easy to see out of, though its high beltline is somewhat concerning. Your author usually feels comfortable in most cars with the driver’s seat in its lowest position, but that wasn’t the case here, making it difficult to see past the Renegade’s hood. This wasn’t the case in the Trailblazer, which was easy to get settled into.

Otherwise, both of these crossovers share similar strengths and weaknesses. The Renegade and Trailblazer both stick their drive mode selectors a little too low and out of the way on the centre console. The pair also make climate control settings available through the infotainment system, with redundant physical controls for easier operation while driving.

There are various ways to approach the subject of how practical these two vehicles are. When it comes to cargo room, the Trailblazer edges out the Renegade by a slight margin. Chevy’s crossover lets you pack 716 L of cargo behind the rear seats, and 1,540 L when you fold those down. By comparison, the Renegade offers 524 L behind its rear seats, which expands to 1,438 L when they’re stowed. When it comes to rear-seat accommodations, you have to pick your preference. The Trailblazer has more rear legroom, while the Renegade has more rear headroom. Finally, the Renegade offers a bit more ground clearance in Trailhawk guise compared to the Trailblazer.

Materials in the two cabins are mixed well and shouldn’t be disappointing. The Renegade uses plenty of rubber coverings, which may degrade over time, but they feel a bit better than the hard scratchy plastic that cheaper vehicles are known for. That hard stuff is found here, but it’s hidden below the beltline and is less obvious. The Trailblazer uses less hard plastics as well and features a few more pleasing materials than the Jeep.

The Renegade rides like a Jeep, which will make fans smile, but others cringe. The ride is very floaty and mushy, providing a vague sense of control on the road. While it’s arguable that this is more preferred on the construction-pocked streets of Toronto, the reality is that the vehicle can sometimes feel like a boat, pitching up and down and side to side at every input. The Trailblazer rides much more consistently – and more car-like – with its controlled movement and roll.

Both subcompact crossovers offer 1.3L turbocharged four-cylinders that are paired to nine-speed automatic transmissions and all-wheel drive. In the Jeep, the powertrain makes a stout 177 hp and 200 lb-ft of torque, which is a nice bit more than the Trailblazer. The motor works well, though getting power down to the road feels a bit sluggish as the transmission can sometimes seem hesitant to give you gears when you need them. The motor is also pretty buzzy, sounding awful when pushed hard. The Trailhawk version of the Renegade, like the one tested, is equipped with a full-time all-wheel drive system with a low range that features a 21:1 crawl ratio. For hardcore off-roaders this will be appealing; for everyone else, it’s an open invitation to learn what off-roading is all about.

The Trailblazer’s 1.3L turbocharged engine makes 155 hp and 174 lb-ft of torque and is also paired to a nine-speed automatic. The gear ratios may be better sorted in the Trailblazer than the Renegade, and as a result the Chevy feels a bit more responsive. While the power figures are in favour of the Renegade, it doesn’t feel much more powerful or faster. Unlike the Renegade, the Trailblazer has a selectable all-wheel drive system with the ability to switch between front- and four-wheel traction, which is mainly to help with fuel efficiency.

Between the two vehicles, it’s clear that the Renegade has a far softer suspension setup, though that’s mostly due to the Trailhawk trim, which is more off-road oriented. As a result, every input is delayed, and it always feels like the Jeep is reacting in slow motion to the driver. It leans dramatically in even the mildest curves, and aggressive usage of the throttle or brakes leads to a lot of forward or rearward pitch. The Trailblazer is far better behaved, with less body roll and quicker response to steering and throttle inputs. In general, it was the far better driving vehicle, feeling more refined and smoother.

The Jeep Renegade Trailhawk that we tested has been rated by Natural Resources Canada (NRCan) to return 10.8 L/100 km in city driving conditions, 8.7 on the highway, and 9.9 combined. However, if you’re looking for better fuel consumption, the non-Trailhawk version manages 9.2 L/100 km combined, according to NRCan.

The Renegade starts at $31,240 including destination for a base Sport model. If you think that’s a lot, the well-equipped Trailhawk model tested will be an eye-watering proposition. With the options it was outfitted with, the Renegade rings in at a whopping $42,215.

The Trailblazer starts at $26,093 including destination for a base FWD LS model. Our AWD RS model also had the Sun and Liftgate Package, Technology Package, and Convenience Package, yet had a price of $36,883, which is far cheaper than the Jeep. That’s even more impressive when you consider that the Trailblazer comes with adaptive cruise control, wireless phone charging, and a power liftgate at that price, just to name a few of the features in favour of the Chevy. The Jeep’s more powerful engine doesn’t seem to make a big enough impact on the drive to make it worth the extra price, though some off-road enthusiasts may feel that the Renegade’s more advanced off-road AWD justified the $6,000.

As a more modern feeling and value-packed vehicle, we are inclined to recommend the Trailblazer over the Renegade. No longer a clunky and clumsy SUV, the Trailblazer now shows what GM can do with a good focus on its small-car division. The Renegade, on the other hand, feels a bit dated, and the compromises that arise when designing an off-road-oriented vehicle are hard to overcome. 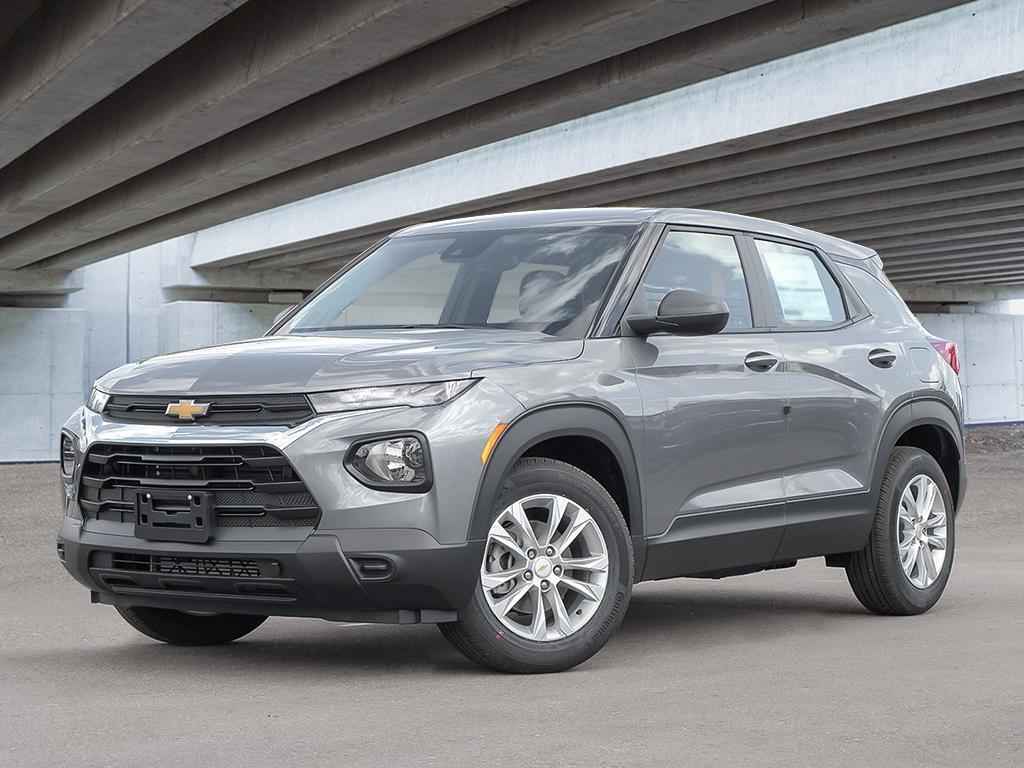