The Honda CR-V is a staple in the compact crossover segment, and a vehicle that many buyers choose when they’re looking for practicality. It’s long been a safe choice, but that doesn’t mean it’s the only choice. Looking at other options like the Kia Sportage provides the chance to find a vehicle that does all the things the CR-V doesn’t. With the Kia maximizing features and performance, it provides a challenge for the CR-V to maintain its solid grasp on the segment.

The CR-V isn’t attractive but it isn’t exactly ugly either. There’s a family resemblance throughout the exterior design, with the CR-V looking a bit softer than the Passport, Civic, and Accord. The taillights are maybe the most attractive area on the vehicle, as they’re edgy-looking and feature a unique tint. The interior is similarly bland, but it’s smartly packaged. There are a few plastic bits inside the top Touring trim that are painted to look like wood and are quite unbecoming.

The Sportage stands out a bit more with a profile that’s unlike other compact crossovers. It shares a few design cues with the Niro and Stinger GT, particularly with the headlights and taillights. The interior doesn’t have any of the faux-premium materials found in the CR-V, and the layout is a bit more logical, making it easy to get accustomed to.

For 2020, Honda has included its suite of safety features as standard equipment. It’s a small footnote as we have a fully loaded Touring model, but not everyone springs for the top trim, and for those looking to save a few bucks by opting for a lesser trim, there’s comfort in knowing features like automatic high-beams, forward collision warning with automatic braking, lane-keep assist, and adaptive cruise control are along for the ride.

Our tester also included blind-spot monitoring and rear cross-traffic warning. The Insurance Institute for Highway Safety (IIHS) tested the CR-V and noted it has excellent scores in crash safety and collision prevention technology. However, the IIHS was disappointed in the vehicle’s headlights as well as the child seat anchors, which were reportedly difficult to use.

Sportage buyers looking for a similar level of safety equipment as the CR-V should spring for the top-of-the-line SX trim. Mid-range models like the EX and higher include a few safety features like lane-keep assist and forward collision warning, while the EX Premium and Tech models get blind-spot monitoring and rear cross-traffic alert. Only the SX model gets parking sensors and adaptive cruise control. We were testing the EX Tech model, so these features were notably absent. The IIHS has a somewhat incomplete report on the Sportage, as the institute tested the mechanically similar Hyundai Tucson, and didn’t report on the headlights and collision prevention system of the Sportage at all. The crash tests suggest that there is a low risk of leg or foot injury to the passenger in the case of a small overlap crash.

Honda’s efforts in terms of spaciousness and usability are what allow it to succeed in this segment. With a whopping 1,065 L of space behind the rear seats, the CR-V is among the largest in the segment. Fold the rear seats down and total cargo volume rises to 2,146 L. Cargo space isn’t one of the Sportage’s strong suits. With 868 L behind the rear seats and a maximum of 1,703 L with the seats folded down, it’s pretty far from what’s offered by the CR-V.

But the Honda maximizes practicality in other ways, too. The rear doors open up to a 90-degree angle, which should improve access to the cargo area or help parents who are loading children. The Honda also has large storage areas such as a massive armrest cubby. The headroom between the two vehicles is pretty close, but the Honda has a good bit more rear legroom.

Visibility is excellent in the CR-V and, for the most part, the controls and layout within the vehicle are pretty good. The infotainment system is perhaps the weakest part of the CR-V. It’s not as pretty – nor as quick to respond – as the one in the Sportage, but it offers Android Auto and Apple CarPlay support as well. The CR-V also has a handy wireless phone charger, which is flanked by a pair of USB ports, all easily accessible rather than being hidden away or tucked behind a panel.

The Sportage has slightly worse visibility, but a better layout of controls. Especially the climate control settings are better labelled and easier to access than the Honda. The infotainment system in the Kia is top-notch, with Android Auto and Apple CarPlay as well as a wireless phone charger.

Beyond the infotainment and safety features, these vehicles have a nice crop of convenience features as well. Both vehicles offer heated seats in the front and rear as well as a heated steering wheel. The Sportage ups the feature count with a pair of ventilated seats up front. The Kia also has a few defined drive modes, including Sport and Eco settings, to better tailor the drive experience.

The CR-V also has a few drive modes, but they’re not exactly well defined: A more responsive S mode is found on the gear stick, and there’s an Econ button on the dash. It doesn’t offer vented seats; though like the Sportage, there is a premium sound system on offer.

Unlike in previous years, the Honda now has just one engine option across the lineup. Under the hood of the CR-V is a 1.5L turbocharged four-cylinder engine with 190 hp and 179 lb-ft of torque. It’s paired to a continuously variable transmission (CVT) and an all-wheel drive system. Truthfully, the powertrain is more impressive on paper than in practice. The CR-V feels downright slow and clunky in action. The CVT whines at any attempt to accelerate and feels sluggish and unresponsive during the times you need it most.

The Sportage features a 2.4L naturally aspirated four-cylinder engine making just 181 hp and 175 lb-ft of torque. It’s paired to a six-speed automatic transmission and an all-wheel drive system that also features a locking centre differential for better confidence in sticky situations. This motor is found in all trim levels except the SX.

Despite the lower output, the Sportage feels far more responsive than the CR-V. The transmission quickly picks a gear and sticks to it as needed. It’s worth pointing out that buyers looking for more power can get a 2.0L turbocharged engine in the fully loaded SX trim, which boasts an impressive 237 hp and 260 lb-ft of torque.

The CR-V is definitely more comfortable in terms of ride quality, but there are moments where it can feel a bit unrefined. Harsh bumps really bring a lot of noise into the cabin. Seats and space help the CR-V feel more comfort-oriented than the Sportage. The seating is plush – though not the most supportive – and we had no concerns over longer drives.

The Sportage is a bit stiffer, but this is only noticeable on poor pavement. On well-maintained roads and highways, the two vehicles are virtually identical in terms of ride quality, but the slightly more cramped Kia and the less cushy seats leave it feeling just a tick less comfortable than the Honda.

The Honda feels unremarkable on the road. No level of throttle or steering input is met with responsiveness or enjoyment. It goes about its business without much issue, and the only complaint we have is that the powertrain does seem to whine when asked for more power. The CR-V never feels agile or sporty, which is fair considering it’s not designed to be a canyon-carver, but rather a family cruiser. It does this job without complaint.

The Sportage feels more sprightly and engaging than the CR-V, although that’s not a high bar to clear. The steering in particular is well weighted and tuned to provide a good sense of control at varying speeds. While the two cars are both considered compact crossovers, the Sportage truly feels like a compact in terms of how it responds to inputs.

Our experience with the two vehicles saw figures that were less efficient than NRCan suggested by about 1.0L/100 km, but this can be chalked up to both vehicles wearing winter tires, which typically negatively impacts fuel economy. The colder temperature during testing also meant that the automatic engine-stop/start features weren’t very consistent in their activation.

Including freight, PDI, and fees, the CR-V Touring model we tested is priced at $43,005. The Sportage EX Tech, meanwhile, isn’t a fully loaded example but isn’t far off of the Honda with a price tag of $40,140. A fully loaded and more equal model would be the SX, which is $42,140 with the added cost of special paint.

The Sportage is more affordable and feels like a better bargain thanks to additional features like ventilated seats and available 2.0L turbo. It’s worth pointing out that the CR-V uses much less fuel than both of Kia’s engines.

Either way, it’s important to reiterate that these crossovers are bought not for their power and driving dynamics, but because they’re practical and easy to live with. With this in mind, the CR-V remains a better pick, but if you value additional features or a bit of fun in your crossover, then it’s worth looking over to the Kia. 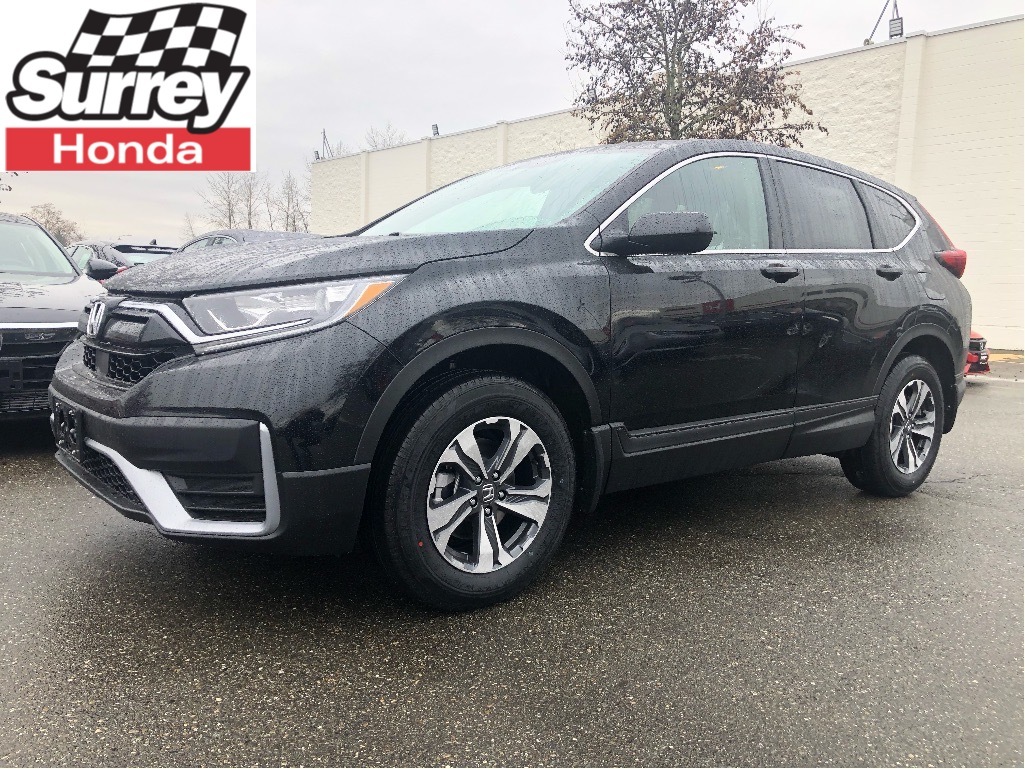