The Audi A6 is all-new for model year 2019, and it once again gives the luxury sedan shopper a taste of the very latest in Audi’s design, technology, styling, and performance.

With the connected and tech-savvy driver in mind, the A6 does some of its best work on long highway drives – where an excellent ride, fantastic cruising range, and an energizing atmosphere form a relaxing and productive environment, with ample room for all occupants.

My tester called up images of a chauffeured getaway from a foreign embassy – thanks to an athletic and stately blending of elements, both formal and dynamic. Numerous signature touches make the A6 instantly recognizable as an Audi, including the scowling mug up front, and expressively animated turn signal lighting in the back. The 21-inch wheels drew plenty from admirers, too.

On board? The exterior design language translates nicely into the appearance of the cabin. Like the body, A6’s cockpit is adorned with modern and angular shapes combined with signature Audi touches, including the blocky shifter, illuminated dashboard “Quattro” badge, and more. The look is instantly fresh and luxurious.

Four display screens face the driver, including the (entire) instrument cluster and head-up display. Wood-grain accenting adds further richness, but it’s visually subdued, leaving the spotlight on the aluminum and gloss black and display screens throughout.

For many, this cabin should represent a very satisfying blend of luxury and high-tech, likely the segment’s best right now.

The A6 supports safe driving in a variety of ways – including its potent LED headlight system, and the inclusion of an arsenal of semi-autonomous driver assist systems, like lane departure warning, blind-spot monitoring, and even an function that can stop an exiting passenger from opening their door, if a vehicle is approaching from the rear.

Two safety-related attributes stood out furthest on my watch: First, the blind-spot warning indicators are bright, vivid, and prominently placed. As such, the presence (or absence) of the warnings are immediately apparent, and highly visible. Second, the braking: In simulated panic-stop situations on bare pavement, the A6 pulled down with near super-sedan G-forces, and a confidence-inspiring pedal feel. The stopping power feels immense, even uncomfortable (a good thing). I don’t often swear in approval of the brakes on big sedans, but I did here.

Front-seat occupants enjoy plenty of space in each direction, with plenty of nearby storage. Entry and exit pose no challenge for most, thanks to wide door openings. At 5'11", in my comfortable driving position, I noted more-than-ample headroom. Ditto in the rear seat. Note that in exchange for the headroom, the A6 does seat you fairly low in the car.

All said, four adults of average or slightly larger size should find A6 sufficiently roomy to relax, unwind, and move about a little. There’s plenty of room in the trunk for their belongings, even hefty luggage. The trunk is motorized, and the trunk features stretch-mesh netting and additional storage cubbies to keep your things organized and secure.

After an initial learning curve to the A6’s controls, features and interfaces, drivers can expect user-friendly, intuitive, and low-effort operation to become second nature in quick order.

The gorgeous digital instrument cluster is fully customizable using only your left thumb on the steering wheel controls. If you like, you can even turn 90 percent of the instrument cluster into an on-screen map with building-level detail. This mode positively electrifies the forward scenery of the cabin after dark, and lets you see tall buildings up the road, and on-screen for easy landmarking in unfamiliar locales.

The two touchscreens on the dash look like something from a sci-fi movie command centre, though they mean you no harm. Both are incredibly responsive and lag-free, like a high-performing tablet. The fully touch-activated system is easily navigated by way of logical and straightforward menus, and precise reactions to the location of your touch. The climate control touchscreen did, however, leave me wishing for some old-fashioned temperature dials and switches, for faster control using less brainpower.

Hundreds of functions can be controlled with a simple spoken command – some, via Android Auto and Apple CarPlay, don’t even require a button be pressed first.

Further, lights, wipers, high-beams, climate control, seating positions, and more are all self-activating or self-triggering. The cruise control can even automatically change the A6’s speed to follow speed limits, strictly or with some tolerance, thanks to a camera that reads speed limit signs.

Even the chunky exterior door handles are actually just switches, which trigger an actuator within the door that does all the work. They look serious, but can be worked with a pinky.

It’s hard to think of a high-end feature the Audi A6 doesn’t have, and I’ll share two of my favourites.

First is the Bang and Olufsen stereo system. This $5,100 upgrade is a must-have for the audiophile, and it’s capable of precise audio reproduction. Even at listening volumes this non-audiophile often finds uncomfortable, music sounds bright, powerful, and vivid, complete with velvety bass and stunning vocals. Most will run out of eardrum before this stereo runs out of firepower, some will have a near-religious experience while listening to familiar tunes at high volumes.

Second? All the digital display tech. Aside from a few niggles with the climate control panel; A6’s instrument cluster and central screens are slick in action, and beautiful to look at. They’ll likely become your new favourite gadgets.

The 3.0-litre V6 features light-hybrid electrification and turbocharging for 335 horsepower. Hybrid power and turbocharging mean big low-end torque that’s virtually silent: the engine is gushing torque at revs so low it’s barely making a sound. Even a moderate throttle-prod whisks the A6 to and beyond the speed limit on the sly. It calls an electric car to mind: torque galore, but virtually no noise.

Passing and merging are handled eagerly, but don’t be shy with the throttle: it’s often lazy. Mostly, A6 prefers to keep the revs down, enhancing economy and refinement at the expense of all-out responsiveness.

At full throttle, performance is swift and satisfying, but largely uneventful. That’s on purpose. Even at high revs with your boot down, the sound is very restrained and largely unremarkable. Gearshifts are imperceptible, too. This setup works best for drivers who primarily prefer motoring in a quiet and relaxed fashion, but who appreciate a good reserve of firepower for use as required.

Note, however, that the A6 uses both a dual-clutch transmission and hybrid system, each of which creates some subtle shuddering or vibration in certain situations, as a normal part of their operation.

This is most prominent in stop-and-go traffic. If you spend a lot of time in that setting, you do have smoother options.

The A6 is one of the most comfortable cars I’ve ever driven. Seats are supportive, highly adjustable, and provide soft comfort without being pillowy and thick. They’re a good place from which to enjoy one of the A6’s best assets, which is its ride quality.

Thanks to an (optional) adaptive air suspension system, my tester handled even rougher road surfaces with comfort to spare, despite rolling on 21-inch wheels with low-profile tires. The adaptive suspension triggers real-time adjustments to the shocks, generating a sort of electronic buffer between you and the road. The result is ride quality that’s more consistent, more of the time – even on less-than-ideal surfaces.

The adaptive suspension also enables great feats of body motion control – including the ability to take even a serious dip or bump with absolutely no rebound. Here, A6’s body moves just twice: up, down, and done.

Occupants are more stable, more of the time, and you get the ride comfort of a big, bloated tarmac-barge, but without all the mushiness.

Mostly, the A6 drives the way it looks like it drives: big, sturdy, and slightly athletic.

Around town at lower speeds, the steering lightens up, making the car easier to move through traffic and around obstacles. On the highway, steering and suspension are reworked to help the A6 feeling heavier and more planted – that is, more clamped onto the line or lane selected by the driver.

Though A6’s size may limit manoeuvrability in some situations, a full parking self-defence system adds peace of mind in tight quarters. The full surroundings of the vehicle can be observed via the central display screen’s single, 360-degree image. There’s a full smattering of radar parking sensors as well. It’s not a Scion iQ where nimbleness is concerned, but you’ll do just fine.

The Audi Drive Select switch gives drivers several drive modes to toggle. Comfort mode does its job exceptionally well, and is best, most of the time. The sportier Dynamic mode stirs the soul of both driver and machine with more urgency, precision, and response. Here, the A6 feels more eager to please, especially on winding roads.

With a well-stocked arsenal of technologies to help deliver efficient performance, drivers are unlikely to find any issue with the A6’s fuel consumption, especially given its size and output.

On my highway-intensive drive, cruising range was appreciated the most: eight hours of driving left me with a good portion of remaining fuel. Official fuel economy ratings are 10.7 / 8.2 / 9.6 L/100 km, city / highway / combined. Your results may vary.

As a big-ticket luxury sedan should, A6 rewards its occupants at every turn with touches large and small that back up its price tag. Fit, finish, build quality, ease of use, and the overall appearance, inside and out, reflect the asking price. With a considerable list of options, my tester’s asking price landed just shy of $100,000. It’s a big ask, but disappointment is very unlikely.

When it comes to the 2019 Audi A6, the largest return on investment will come to tech-loving folks set on spoiling themselves with plenty of fun new gadgets, and authentically six-figure comfort levels.

Audi A6 available on autoTRADER.ca 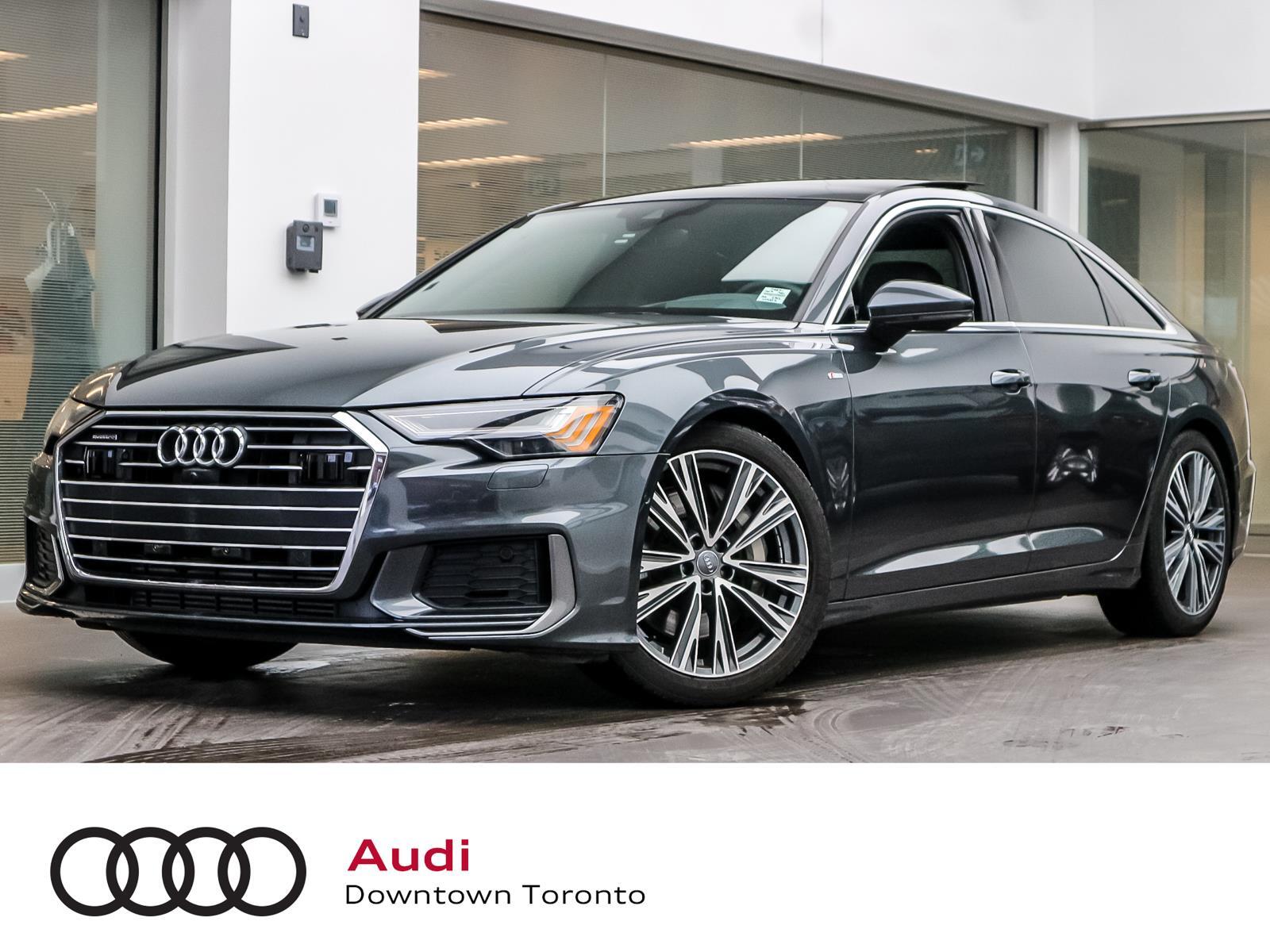