Cars like the 2019 Subaru BRZ haven’t got much longer on this planet by the looks of things. Most people want self-driving electric transportation devices that are as safe as a nuclear bunker and as much fun to play with as a bag of wet newspapers.

That’s a real shame because those folks are missing out on just how entertaining the act of driving can be.

The aging Subaru BRZ is no less fun now than when it was first released more than six years ago, and given how rare pure, affordable sports cars are these days, driving the BRZ feels as exciting and fresh as ever.

It’s easy to jump on the bandwagon and shake a fist in the air screaming for more power from Subaru’s 2.0-litre horizontally opposed (Boxer) engine; hell, I’ve done it myself many times before.

Horsepower is pegged at 205, and torque at 156 lb-ft. To give some perspective to those numbers, a run-of-the-mill Honda Civic Hatchback has 21 lb-ft more torque, delivered at 4,500 fewer revs. The sportier Civic Si has more torque and matches the BRZ’s horsepower. And the slightly cheaper Nissan 370Z offers up 127 more ponies and 114 more torques from its V6.

But at less than 1,300 kg, the BRZ is nearly a flyweight, meaning that it can do a decent amount with relatively little power. The engine needs revs to eke out whatever it can; and pulling away from a stop light, grandparents in a Malibu will have the little sports car eating their dust without even realizing it. The BRZ is not meant to be a drag racer.

Out in the countryside, winding the little four-cylinder engine out makes for a more engaging driving experience, and moves the little car along smartly, even if the engine note is more coarse than racy.

The skinny 215-width rear tires can be easily overwhelmed, even with the BRZ’s modest power, so there’s still enough for lurid drifts, if one partakes in such hooliganism.

With increasingly oppressive traffic and speed laws across much of the country, having a small, lightweight car that needs to be revved means it feels more fun, with the happy bonus of a reduced risk of losing one’s licence.

Driving around rural parts of the Niagara region, I relished horsing the BRZ around on the same roads I covet as a motorcyclist. They rise and fall and ebb and flow through farm land and along the edge of the escarpment, and give plenty of opportunity work up the little Subaru into a frenzy.

In that frenzied state, it seems happiest, with wildly quick steering and – despite its electric assist – still plenty of road feel. The BRZ handles really well, transitioning through tight S-bends with minimal body roll and a wide, low, and planted feel.

Want a bit more excitement? Give a bit more throttle and it’s easy to cut the rear end loose.

The Raiu Edition (and BRZ Sport-Tech RS) have larger (326 mm) front brakes, clamped by Brembo-branded calipers. The rears, at 316 mm, are also larger than the lower trim models. Stopping happens in short order with great initial bite and an easy-to-modulate pedal.

The SACHS performance dampers contribute to the Raiu’s accomplished handling, yet the ride quality – while stiff – is perfectly acceptable for a high-performance car.

Decent ride notwithstanding, the BRZ benefits from comfortable seats – at least up front, anyway. The pair of front buckets offer minimal adjustment, yet fit my slender frame comfortably, offering great support on my back and thighs for longer trips, but also have aggressive bolstering (and a faux suede material) to keep the driver in place when horsing around with the car.

The back seat? Well, that’s a different story. Headroom isn’t great and legroom is virtually non-existent. I’m of average height, yet with the seat set to my driving position, there’s still not enough room behind me for my nine-year-old son.

For the most part, Subaru has done very little to the look of the BRZ during its extended lifespan, and yet, it still grabs attention everywhere. The Raiu Edition comes only in Cool Grey Khaki paint that, when coupled with the blacked-out wheels and STI-branded spoilers and skirting, looks not only fresh, but like a serious sports car. Even people who normally pay little attention to cars would stop and comment positively about the Raiu’s appearance.

It’s a sleek, low and well-proportioned car that appears more exotic than its modest cost (and considerably familiarity on the streets) suggests.

Inside, the BRZ is laid out as a driver’s car. The steering wheel is small and racy, and it frames a gauge binnacle dominated by a big, round tachometer, just the way it used to be on sporting cars in the good ol’ days before gauges all became digital Vegas light shows. The centre console has some toggle switches and dials to control climate and secondary functions, and the infotainment system slots in just beneath a pair of squashed vents. The design is embellished with some red stitching, but otherwise, there’s nothing fancy here, and I didn’t wish for any more flamboyance at all. The BRZ gives just what you need to have fun driving without the superficiality excessive styling.

Simplicity is often synonymous with user friendliness, and that’s the case with the BRZ. Proper buttons, dials, and switches can be operated with one’s eyes closed, and the infotainment system includes Apple CarPlay and Android Auto, and its touchscreen is within an easy reach of the driver.

Buying most new cars requires a few hours or more for the driver to acquaint themselves with all the set-ups and features (and operation thereof), but the BRZ doesn’t even need an owner’s manual. Everything makes sense and operates the way it has in cars for decades.

The BRZ Raiu Edition comes only with a six-speed manual transmission. That’s a feature, as far as I’m concerned, and it gets an extra point for it on the score. Beyond that, there’s a decent stereo, navigation, heated seats – and well, that’s about it. At times I’m thrilled to be driving some luxo-barge with massaging seats and a suspension made out of thick buttermilk, but not once did I wish for something the BRZ doesn’t have (ahem, besides turbocharged power, that is).

There’s not much space for tall passengers up front. There’s not much space for any passengers in the back. And the trunk depth is negligible, though Subaru has always claimed the BRZ can carry an extra set of tires if the rear seat is folded down. That’s probably true, but folding that seat is a bit of a chore that requires climbing into the back seat and fiddling with a pair buttons before the whole seatback comes down in one unit.

In Southern Ontario, a good set of winter tires would make the BRZ a fun all-year car since we don’t get much snow anymore. Still, its low ride height means that even moderate snow can bog down the little Subie.

The BRZ is equipped with the essentials in terms of passive safety functions. It’s got a good, solid structure and an abundance of airbags. What it doesn’t have is lane-keeping control or automated cruise control that will help the car mitigate its driver’s inattention. The best safety features this car offers is a driving experience that keeps the driver engaged enough to pay attention, and sporty handling and brakes to avoid trouble.

An average city consumption of 11.2 L/100 km suggests the BRZ is tuned for fun rather than frugality, especially for such a small, light car. 8.2 L/100 km on the highway is better, but a far cry from something like the efficient Civic Si.

That modest inefficiency wouldn’t be so bad except that the BRZ requires premium fuel, and the tank, at only 50 L, drains pretty quickly, giving little range.

At $31,750, the BRZ Sport Tech RS is a decent value, offering the upgraded suspension and brakes, and giving the owner a few choices for colour. The Raiu Edition adds $2,000 to the bottom line for a body kit, unique paint, and a short-shifter, and this strikes me as not such a good deal since there’s no appreciable performance upgrade. That said, if BRZ buyer was looking to add on all those goodies à la carte, it would surely cost more – and then they wouldn’t have the Raiu-exclusive colour.

Subaru’s BRZ is getting on in years, yet somehow, every year there’s a new variation that entices me enough to drive it again and I’m remembered just how fun driving can be. Then I start thinking seriously about picking one up for myself (until my family reminds me we don’t all fit), and I consider just how much longer we, as driving enthusiasts, have before cars like the BRZ are gone for good.

When that happens, I’m sure going to miss it, and I bet you will too. 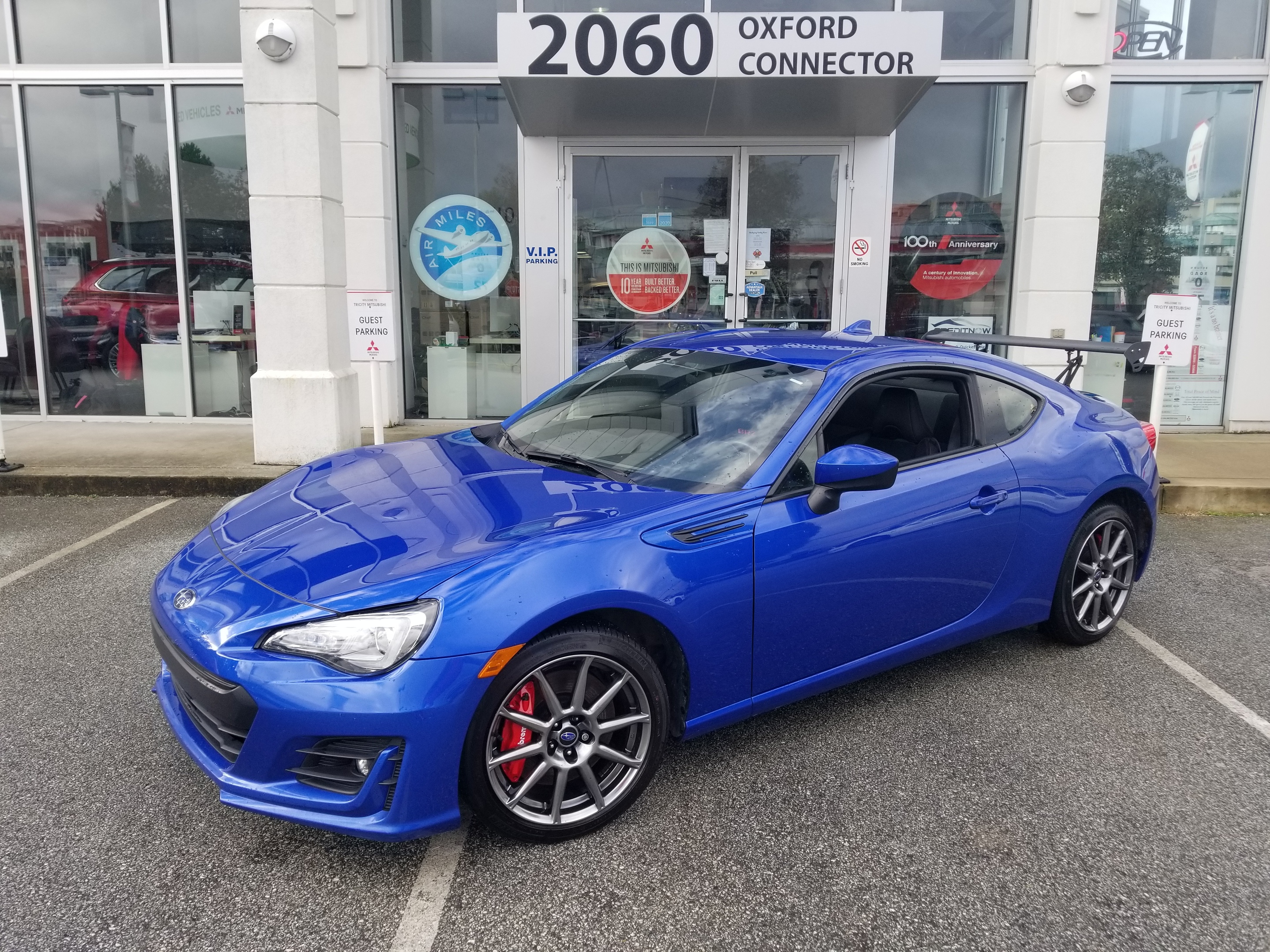