The 2019 Ram 1500 Limited might not be your long-distance road tripper of choice, even if purely from a fuel efficiency perspective. Beyond the big engine / big curb weight combo, for some the idea of taking a full-size pickup anywhere but the feed lot or the farm is a non-starter (unless they’ve hitched up a boat or a camper, in which case a weekend in each other’s company is perfectly acceptable).

Sets a high bar for what could be expected in a luxury truck.

In reality, however, most full-size trucks are hauling air – and at the upper end of the market, they’re comfortable enough as daily drivers to coddle for a thousand kilometres as well as on the morning commute. It was for this reason that I specifically requested the 1500 Limited for an upcoming sojourn from Montreal, Quebec, to Rimouski, an 1,100 km round-trip down the frozen spine of the St. Lawrence River in mid-winter.

The Ram 1500 is all-new for this model year, and with its range-topping Limited trim it sets a high bar for what could be expected in a luxury truck. It doesn’t take more than a few seconds inside the cabin of the Ram to realize just how much effort has been invested in the kind of small details that are so often overlooked in pricey pickup interiors.

Textures are welcoming and differentiated when moving from one surface to another, combined with enough balance between light and dark shades of leather and plastic to bring those small touches to the surface. Some won’t be enamoured of the elaborate stitching found on the doors and console hides, but I happen to be a fan – and it’s less twee than the buckles-and-satchels found in some other full-sizers.

Even the Ram’s control surfaces and driver displays have been elevated in the Limited. An enormous – and in truck country, that word means a lot – vertical LCD touchscreen dominates the centre stack, and while it takes a bit of getting used, by the time you get the hang of it it’s easy to move from climate to entertainment to communications settings. It also looks the business, and is a clear shot across the bow of Ford and GM’s more modest setups.

There are of course knobs and dials to compliment the on-screen action (but don’t get them confused with the rotary transmission shifter / four-wheel drive tabs located just to the left). Directly in front of the driver is another configurable screen, flanked by two fetching analog gauges that use a gear-within-a-wheel motif to add some interest to the dashboard.

That rotary shifter frees up ridiculous amounts of room inside the truck’s deep centre console, which I of course loaded with a hoard of cheeses, fruits, and chocolate to see the trip through. The second row of seating for the four-door crew cab model I drove was similarly spacious, capable of accommodating roller luggage with the bench folded up, and six-foot riders when locked in place. Up front I was able to step out of the pickup with little to no fatigue after either of my protracted six-hour stints behind the wheel, a strong testament to the heated and cooled thrones outfitted to the Limited. 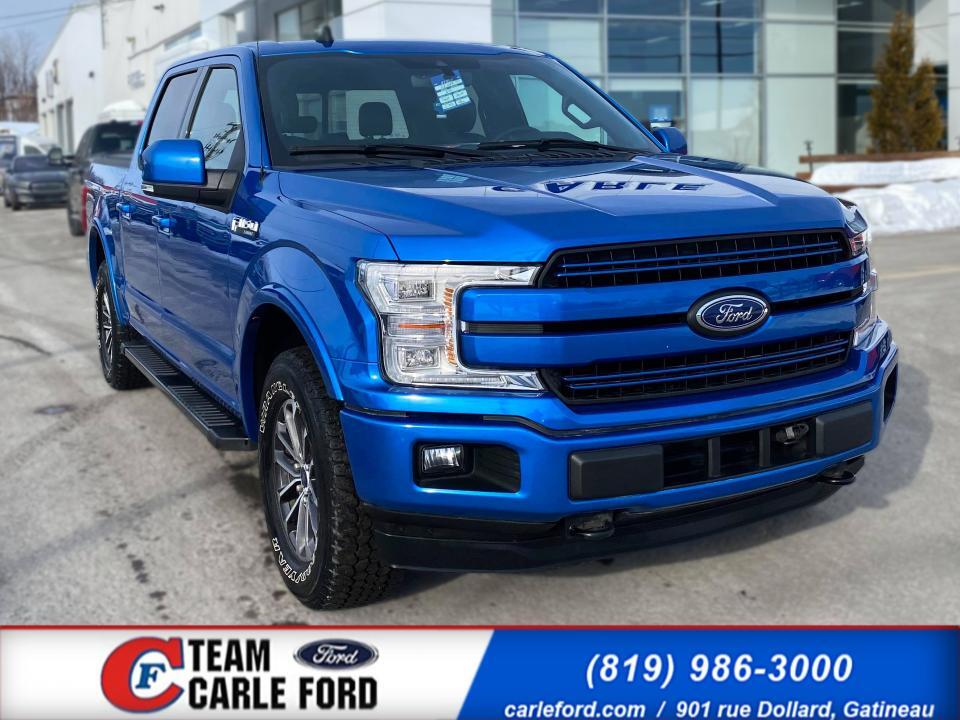 For all of its next-level interior wizardry, Ram has kept things largely status quo under the hood. Although mild-hybrid versions of both its V6 and V8 engines are on their way (a $795 option for the Limited), my tester was outfitted with a carry-over 5.7-litre eight-cylinder good for 395 horsepower and 410 lb-ft of twist, matched with a superb eight-speed automatic transmission.

No doubt the additional torque provided by the 48-volt electric motor found in the assisted editions of these engines would a welcome bonus; but it would be a mistake to write off the Ram’s V8 due to its lack of Ford’s turbos or Chevrolet’s direct-injection. On the highway the 1500 eats asphalt with ease, and on the two-lane that picks up where Highway 20 ends (roughly 80 km before Rimouski), I had plenty of passing power to deal with slower traffic. Adaptive cruise control took some of the burden off of my shoulders, too, when I simply couldn’t find a safe spot to pick apart the line of vehicles stretching ahead of me.

The vehicle also features cylinder deactivation technology that puts up to four pistons on pause should the load be light enough during steady-state cruising, which is better than nothing, but it’s to be expected that a pickup posts pickup-like efficiency figures: I saw 15 L/100 km on the highway, which given the sub-zero temperatures is a fair approximation for its official 13.8 L/100 km rating. Does this make a dent in the pocketbook over 1,100 km? Let’s just say you know you’re in an area that sees a lot of truck traffic when the pre-paid gas pumps don’t shut off automatically at the century mark.

Power and prestige aren’t all that the 2019 Ram 1500 Limited has going for it, of course. Unique among its rivals, the 1500 features a coil-spring rear suspension rather than a traditional leaf setup, and in the Limited it moves to air springs with adjustable ride height, which was useful when ploughing through the three-foot snowbanks that awaited me on my return to post-blizzard Montreal. Altogether it’s a more controlled, and certainly more comfortable ride than what you would find from Blue Oval or the General, and it has little to no impact on capability either (towing capacity is listed at 12,700 lb, and payload at 2,300).

The truck also makes a classy first impression, what with its somewhat more subdued styling than in years past that tones down some of the big rig elements that have been explored to the brink of caricature in this class of vehicle. It’s a tasteful mix of chrome and vertical space when considering the grille, while the sides remain smooth and the tailgate uncomplicated by parlour tricks. My sole reservation is the “1500” call-out on the side of the hood, a somewhat garish and fairly unnecessary reminder to everyone around you of what you are driving.

Then there’s the price. How deep do your pockets have to be to live the Limited lifestyle? Even when you factor in the numerous (approaching $10K) incentives slicing meat from MSRP in the truck world, the Limited’s still going to set you back well over $60K, which is close to double the cost of the entry-level Ram. Still, after spending so much time with the Limited, it’s clear to me that Ram now owns the plush truck segment. While this territory may once have been claimed by Denali, or usurped by King Ranch, Ram has clearly gone through the extended cinematic training montage required to come out on top and plant its flag as the new monarch of moneyed pickup buyers.

Chevrolet Silverado 1500 GMC Sierra 1500
Optional Equipment
10 0
Scoring breakdowns 7.8
8 Styling
8 Powertrain
8 Quality
8 Comfort
9 Practicality
8 Drivability
8 Usability/Ergonomics
6 Fuel Economy
8 Features
7 Value
About Benjamin Hunting
Benjamin Hunting is a freelance writer who enjoys keeping the shiny side up during track days. He is also an avid musician and a friend to vinyl.
Follow me
You may also like
7.8