From beak to backside, the 2018 Crosstrek has been redesigned. Following the Impreza onto the Subaru Global Platform, this subcompact-ish SUV represents excellent value for people who genuinely need all-wheel drive: camping, off-roading weekender types. If you’re simply a big city commuter, well, read on anyway.

Value? It’s one of those words people toss about without first agreeing on its meaning. Think of value as that sweet spot where price and quality got together and made a baby. In this case (and in the case of most SUVs, subcompact-ish to escalated-immense) the baby is not going to win any beauty contests. Indeed, when you look at what the Crosstrek offers, then at the price, then at the Crosstrek itself, you may conclude that it looks far better on paper than in the flesh. But who cares?

Maybe the Crosstrek’s not pretty during the weekdays but you’ll be on the inside, looking out. On weekends and off-road, covered in mud and gripping whatever you’re traversing, it’ll look just fine.

Besides, part of that redesigned exterior means a roomier inside. The Crosstrek’s new chassis sports a slightly longer wheelbase than its predecessor by 30 mm (1.18 in). So there’s more legroom for your backseat passengers. It also has a slightly wider track (20 mm or 0.79 in), allowing a wider gate opening for bikes, tents, firewood, bear repellent, or whatever else you need to pack. The 60/40 split backseats flatten almost completely to accommodate all that.

The slightly expanded interior feels roomy – not subcompact-ish at all. You have good sightlines from up high; its ground clearance is an outdoorsy 221 mm (8.7 in), riding on standard 17-inch aluminum alloy wheels. Though it looks tippy and gangly – like your teenage brother’s sudden growth spurt – it holds well in bends. But we’ll talk more about that later.

Finding your trim and tranny

The Crosstrek is available in four models: Convenience, Touring, Sport, and Limited. From there, you customize. This tester, a Sport, proudly features grey and black cloth seats with a visually jarring orange double stitching. (You need to go all-out to Limited for leather seat surfaces – still jarringly orange-stitched.) Only the driver’s seat is powered.

You can upgrade from a six-speed standard transmission to a continuously variable one (CVT) in the Convenience, Touring, and Sport models (CVT is included in the Limited, period). This tester had the upgrade, a $1,300 charge on the Sport’s $27,795 kick-off. Was it worth it? I believe so.

Motoring enthusiasts love to hate CVTs, saying it often sacrifices the joys of driving at the altar of better fuel efficiency. CVTs also often whine like lambs being slaughtered on that altar. But things are changing. CVTs are improving and the Crosstrek is among the quickly growing minority of exceptions. It still whines but works remarkably efficiently – enough to not make me wish Subaru had sent us a manual tester.

But to assuage the nostalgic types, this CVT includes a manual mode with seven “speeds” that you can paddle between. It’s quite enjoyable and you’ll quickly miss the shifting experience less.

You probably won’t miss the $1,300 ding because even the most ardent stick shifter would think twice when presented with the Crosstrek’s fuel economy stats. The manual gets 10.5 L/100km in the city and 8.1 on the highway, while the CVT renders a superior 8.8 and 7.2.

Subaru loves to remind us how well-built their products are and how long they last. A study by JD Power Automotive Industry Solutions concludes that 98 percent of Subarus sold in Canada over the last decade are still being driven.

98 percent? That’s getting into Nadia Comăneci territory – most impressive, Impreza! Small wonder Subaru’s owners are as rabidly loyal as Bob Dylan fans, who is also still on the road all these years later.

Then there’s the four-cylinder Subaru Boxer engine. It loses points for artistic impression. Meaning? Efficient as it is with its CVT pairing, it’s weak for the size, achieving just 152 hp – albeit with a mild improvement on its previous 148, at 6,000 rpm – and just 145 lb-ft of torque at 4,000.

A turbo option ought be included in the upper models. This is one of my only complaints. In the gymnastic events that are city driving, commuters need a responsive engine to merge and pass. With a not-insignificant curb weight of 1,446 kg (3,188 lb) the 2018 Crosstrek Sport with CVT hurtles from zero to 60 – eventually.

Apple CarPlay and Android Auto come standard with any 2018 Crosstrek model, which makes sense. Younger customers are more likely to buy the less expensive versions. Older buyers may see these technology translators as baubles. For younger ones, they’re as necessary as oxygen.

Meanwhile, simplified Bluetooth pairing with near-field communication (NFC, similar to what’s found in tap-to-pay terminals) means no more troublesome pecking, back-pecking to correct, then re-pecking at numbers and letters on your phone with cold, numb fingers just to log into the car’s computer. Once older buyers try this, they may take a greater interest in the aforementioned baubles.

At this Sport level, the base 6.5-inch infotainment screen is upgraded to 8-inch. The important commands are integrated into the steering wheel. Taking its design cues from the outside, the steering wheel ain’t pretty – looking like something that escaped from the set of Star Trek: Deep Space Nine – but is exceptionally handy. 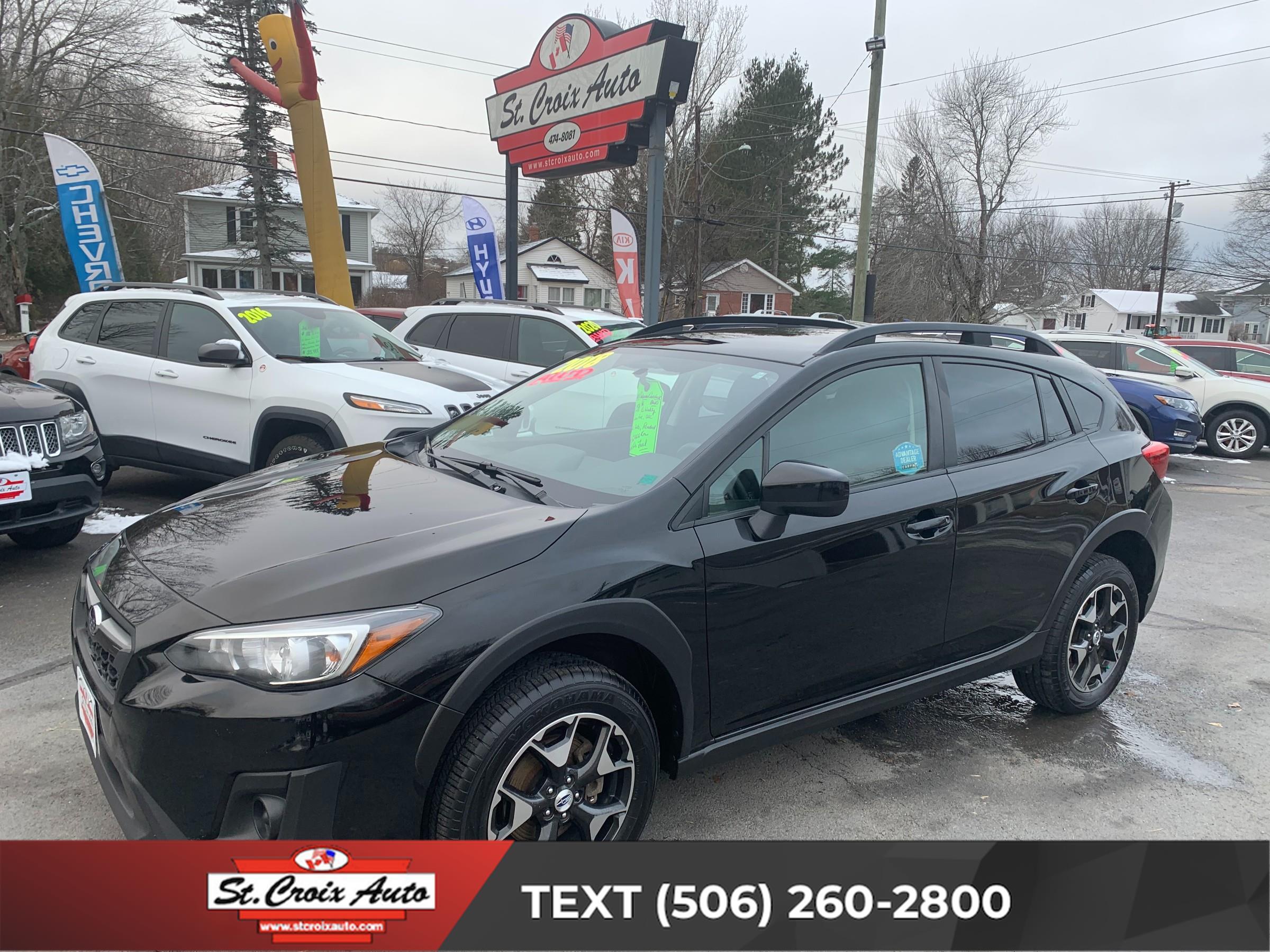 Subaru’s X-mode comes standard with any CVT. This tech is especially valid for people with little off-road experience who want some fun. Activated, it monitors individual wheel spin, which is likelier to happen on snowy, wet, muddy embankments, and controls it before spinning itself into a problem.

On steep declines, the urge to depress the brakes completely can be overwhelming, increasing your chances of sliding out of control rather than slowing and gaining it. In X-mode, using the hill-descent control, the Crosstrek brakes for you. You take your foot away completely and simply concentrate on steering the best route down.

You can pay substantially more for these included X-mode features from premium brands. If you’re outdoorsy, that aforementioned $1,300 for CVT quickly feels like an even smaller bite.

Safe night driving is an important part of the weekend warrior’s experience. This Sport model provides LED steering-responsive headlights (SRH). They point wherever you steer, illuminating where you will soon be going rather than just directly ahead. On a dark bendy road, that could mean a big difference in the shape of your grille. However, you can choose to disengage the feature with the SRH button just to the left of the steering wheel.

Another helpful safety feature for someone who may not be as experienced as they’d like is active torque vectoring. But let’s go back on the road to talk about it.

What about the weekday drive experience?

Earlier I mentioned how enjoyable it is to drive the Crosstrek in paddling mode, and also how tippy the Crosstrek still looks, despite its redesign. Active torque vectoring lessens oversteer in turns by applying brakes to the individual wheels overloaded with torque. So it grips nicely. (Mind, no technology actually defies the laws of gravity. Drive safely.)

The Crosstrek’s steering and braking are quite good – no complaints. However, the throttle is a bit excitable. Left temporarily in park, the engine would scream blue murder whenever I exited the car to slide open the gate to our house’s parking pad.

The ranges of positions for the seat and steering wheel are excellent. I was almost immediately adjusted and comfortable. The seat is just firm enough for a long drive. But on bumpy roads – and muddy fields, dirt track and roads – the ride remains smooth.

Oddly, the Crosstrek, even at the Sport level, comes with an old-fashioned key to start it up, slightly quaint in this day and age. Mind, if igniting with a turn of the wrist really is a problem, you probably ought to re-evaluate things, big picture. Maybe get out there and off the beaten track. The Crosstrek is a good choice for such an experience.